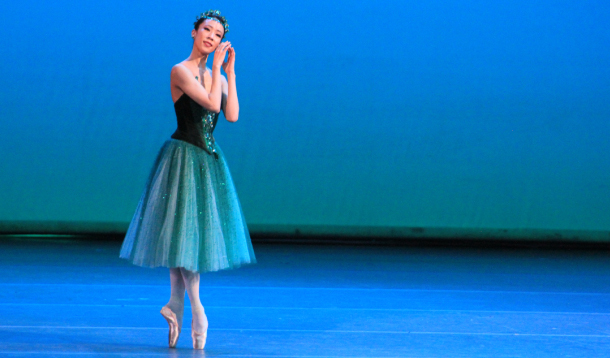 Korean ballet dancer Park Sae-eun was named best female dancer at the Benois de la Danse awards, one of the ballet world’s most prestigious honors, on Tuesday in Moscow.

Park, a “premiere danseuse” at the Paris Opera Ballet, is the fourth Korean to be named a top dancer at the ceremony.

Kang Sue-jin, currently director of Korea National Ballet and formerly a principal dancer at Germany’s Stuttgart Ballet, was the first Korean to win the honor in 1999.

She won the prize for her performance as the lead in “Diamonds,” which is part of choreographer George Balanchine’s “Jewels” trilogy. Benois de la Danse reviews performances done by world-renowned dance groups every year and gives out the awards in Moscow.

The competition was first set up in 1991 to honor French choreographer Jean-Georges Noverre (1727-1810) by the International Dance Association in Russia, and started naming winners the following year. Big-name dancers like Sylvie Guillem of Britain’s Royal Ballet and American Ballet Theatre’s Julie Kent are some of the previous winners.

At the awards ceremony held at Moscow’s Bolshoi Theater, Park said that she was thankful and surprised as she did not expect to win at all. She also added that she appreciated being there with many other outstanding colleagues.

“I don’t know [what allowed me win the award,] but people often comment on the details of my dance moves,” Park told Yonhap News Agency after her win.

“Maybe I was a little more sensitive about expressing the music rather than just spinning, running and making beautiful lines [while dancing].”

She then added that she wants to focus her efforts into playing more roles when she goes back to Paris so that she can meet audience expectations as she now feels the need to carry bigger responsibilities.

“The retirement age at the Paris Opera Ballet is 42, and I want to continue dancing until then,” the 29-year-old dancer said. “I haven’t decided whether I will go back to Korea or remain in France after I retire.”

It’s been about two years since she was named a “premiere danseuse” at the Paris Opera Ballet. She joined the ballet group in 2011.

Before joining the elite company, she was known for her stand-out performances at international dance competitions, including the Varna International Ballet Competition in Bulgaria in 2010 as well as Prix de Lausanne in Switzerland in 2007.

She won the silver prize at the 2006 USA International Ballet Competition. There was no gold prize winner that year.

After her win in Lausanne, Switzerland, she had the opportunity to work with ABT Studio Company for a year, the highest level of the American Ballet Theater training ladder.

She also worked at the Korea National Ballet for some time before making her way to Paris. She is the first Korean ballerina to become the official member of Paris Opera Ballet and the second Korean to do so after ballerino Kim Yong-geol.