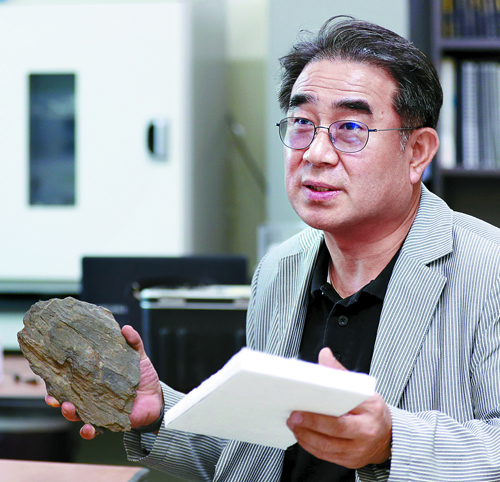 Cho Seung-yeon, a professor of environmental engineering at Yonsei University, explains what radon is with a radioactive rock and bed sponge at a research lab at the school’s Wonju campus in Gangwon. Cho says the radioactive element may be dangerous, but there’s no need to be terrified of it. [BYUN SUN-GOO]

Radon is a radioactive, colorless and odorless gas that can be found in nature as an indirect decay product of uranium or thorium. It is considered a health hazard due to its radioactivity, and a link between radon and lung cancer was first spotted in the 1920s among mine workers in Europe. These days, radon has caused concern as mattresses from Daijin Bed were found to release radon at levels that exceed safety standards.

Consumer anxiety was especially fueled by the state-run Nuclear Safety and Security Commission (NSSC) going back on its initial announcement that Daijin Bed’s radon-emitting mattresses were safe. It first said the radon emission was within the safety limit, but five days later, it made a second report that said Daijin’s products emitted 10 times more radon than initially stated. What’s adding to this concern is the possibility of other radon-emitting products being spread among the public, as monazite — the mineral known as the main reason for the mattresses’ radon emission — was revealed to have been used for other health supplements as well.

Cho Seung-yeon, a professor of environmental engineering at Yonsei University, is an expert who heads the Radon Safety Center at the school. He recently sat down for an interview with the JoongAng Ilbo, an affiliate of the Korea JoongAng Daily. Following are excerpts from the interview.

Q. What exactly is radon?

A. Radon is a gas produced as radium decays. Radium exists in a wide variety of things like rocks, soil and construction material, which naturally exposes us to radon. About half of the natural background radiation we absorb is from radon. As it is gas, it mainly enters our body through breathing.


If it’s such a common element, why is it considered so dangerous and exactly how dangerous is it?

There’s nothing to worry about in an ordinary atmosphere setting. The problem occurs when its concentration level is high in an enclosed place. In the past, there was an abnormally high occurrence rate of lung cancer among uranium mine laborers. This was what first gave the spotlight to radon in the early 20th century. But it was later revealed that ordinary people can’t be completely safe from radon either. A cover story in Time Magazine in the 1980s was what made it a social issue. In 2009, the World Health Organization officially announced that radon was the No. 1 cause of lung cancer for non-smokers. Of course, the most abundant reason for lung cancer is smoking. Although there are differences according to country, around 3 to 12 percent of all lung cancer patients are estimated to track back their disease to radon.


Have there been estimates on radon’s effect among Koreans?

Around 16,000 Koreans die due to lung cancer every year and roughly 2,000 are reported to have suffered from the disease due to radon. This is equivalent to three to four times compared to deaths from drunk driving (approximately 600 per year). Due to geological reasons, Korea is classified as a country with a high radon concentration, which is why managing and monitoring of the substance is important. Korea currently has regulations for indoor air quality of public facilities according to international standards.


The NSSC confused the public by reversing its original announcement. How did this happen?

It’s because the initial investigation didn’t consider thoron, radon’s isotope. It may sound difficult for non-experts, but radon mainly has two types of nuclides: radon (Rn-222) and thoron (Rn-220). These two are both isotopes but they stay in the air for different amounts of time. Radon (Rn-222) lasts for 3.8 days while thoron (Rn-220) lasts for just 55.6 seconds. The amount of thoron reduces by half in less than a minute so it barely lasts in the atmosphere. Generally, the amount of radon-222 is considered in setting radon limits for indoor air quality while thoron is usually left out. The NSSC judged radon emission was below the safety limit because it underestimated the effect of thoron.

In the first investigation, the radon concentration on the surface of Daijin’s mattresses was 624 Becquerel per square meters of thoron and 58.5 Becquerel per square meters of radon. It depends on the expert conducting the research to calculate how much of the existing amount of radioactivity affected the human body, depending on the amount of substance, its characteristics, amount of exposure and amount of breathing. The NCCS failed to accurately calculate thoron’s effect on its first investigation. In the second round, it found out that the radioactive effect of the product on the human body exceeds the safety limit by 9.3 times.


If thoron disappears so quickly, why did it appear in such a large quantity in the test?

The radon measurement tool used by the consumer who first reported the case to local media was a device called “Radon Eye.” I participated in developing the product as well. Unlike conventional tools made for experts, this particular product measures radon and thoron at once. The informant apparently found it weird that the device, which shows normal numbers in other parts of the house, came up with a huge number around the mattress. This is because the device measured the amount of thoron that immediately came out of the monazite mineral before disappearing.


Does this mean we have to add thoron to the list of regulated elements?

What’s problematic here is that the product in question is a mattress. The monazite in the bed was inserted to produce negative ions [which Koreans generally believe to benefit the health]. The problem is that thoron from beds or sheets can be absorbed through respiratory organs before it disappears. Inside the human body, radon and thoron turn into elements like polonium, bismuth and lead as they dissolve. Their amounts in the atmosphere are too small to be a problem, but inside the body they cause harm by attaching to the cells. The link between radon and lung cancer was studied many times, but Europe and the United States are eyeing their relation to skin cancer, brain cancer and blood cancer as well.


There are also rising concerns over radon in the house, office and public spaces, right?

The amount of radon in our daily lives can be measured. Advanced countries like the United States are advising to do so every two years, including when you buy a house or move. Radon concentration in the air can differ by neighborhood, house and even among rooms in the same house. This is because there are so many ways radon can be produced and distributed. If you make measuring radon a habit, you can understand the “radon pattern” in which indoor situation radon concentration gets higher. It’s also important to ventilate often, either by opening the window or using machines. This drops the level of radon.


Do you find the public’s current fear of radon excessive?

It’s understandable that people fear so much — you spend one-third of your day in bed. But there’s no need to excessively fear radon in our daily lives, like emission coming from small interior pieces for instance. A certain amount of radon comes out even from our own bodies. The problem, however, is the radon emitted from soil or construction material. These can be fully managed within safety limits if we put in a little more attention. Research in the United States revealed that the cost of measuring radon and reducing it was at around 20,000 won ($19) per 3.3 square meters (35.3 square feet).


How should radon-related regulations be improved?

The main problem is related offices are dispersed in many government departments and institutes: NCCS, Korea Institute of Nuclear Safety, Ministry of Environment, Health and Welfare, Ministry of Education, Ministry of National Defense and more. Thus, experts that answer the same question will differ. International research results on radon are updated often, but it’s hard to apply the global trend if the experts are not in the same place. There needs to be a comprehensive system to manage radon experts.