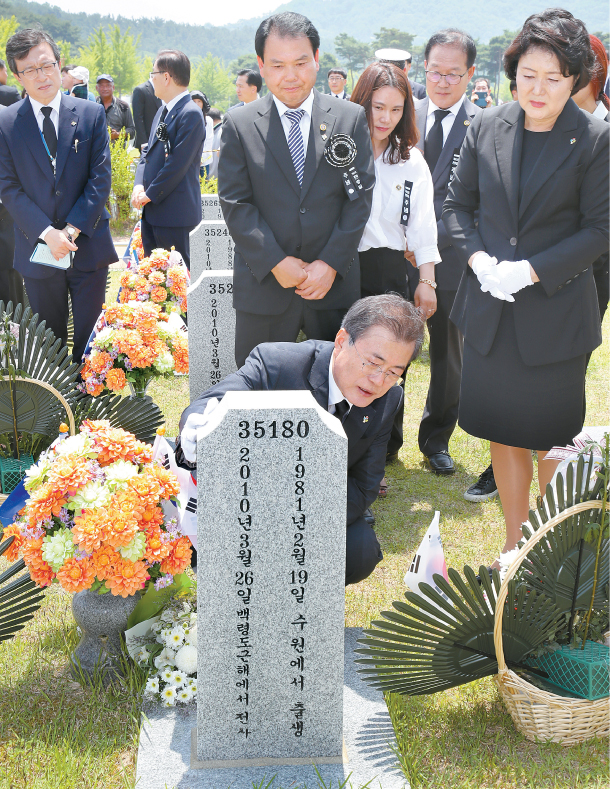 After attending a memorial ceremony at the National Cemetery in Daejeon on Wednesday, President Moon Jae-in visits the graves of the sailors killed on the warship Cheonan, which Seoul believes North Korea torpedoed on March 26, 2010. [YONHAP]

President Moon Jae-in on Wednesday promised to recover remains of soldiers killed during the 1950-53 Korean War from the demilitarized zone if inter-Korean relations improve to allow such an undertaking.

In a Memorial Day speech before relatives of fallen soldiers at the Daejeon National Cemetery, Moon, who served in a special forces unit in his 20s, said he would make the recovery of soldiers’ remains from the DMZ “a priority.”

“Should inter-Korean relations improve, I will push for the recovery of remains from the DMZ as a priority,” Moon said. “By doing so, we can also expect to recover remains of foreign soldiers such as U.S. soldiers [from the DMZ].”

Moon’s promise to bring home yet-to-be recovered remains of soldiers who fought in the three-year-conflict a half century ago echoed the overall theme of his speech commemorating the 63rd Memorial Day: that his government will not forget the sacrifices of those who gave their lives for the good of the nation.

An estimated 131,000 Korean soldiers and an estimated 1,500 soldiers of the United Nations Command went missing during the three-year battle.

To recover remains from a buffer zone that is 250 kilometers (160 miles) long and approximately 4 kilometers wide, the government needs consent from North Korea.

“The government will continue recovery efforts to find remains of soldiers and police officers killed in the Korean War to the last person,” the president stressed.

The Korean War broke out when the Soviet-backed North Korean army invaded an ill-prepared South Korea on the night of June 25, 1950. Three years of fighting devastated the peninsula and countless lives were lost, both among civilians and military servicemen. The war ended in a truce, not a peace treaty, on July 27, 1953, leaving the Koreas still technically at war and making the inter-Korean border one of the most heavily fortified zones in the world.

It was the first time in 19 years that the government hosted the Memorial Day ceremony at the Daejeon National Cemetery, where not only soldiers but also civilians and government workers such as firefighters who died in the line of duty are laid to rest.

Echoing his campaign promise that he would make “a country worthy of being called a country,” Moon said his government will look after the graves of patriots with no surviving relatives.

“As I paid respect to Sergeant First Class Kim Ki-uk, who died in the Korean War, I thought about the faith a country can give to its people. For Kim, he sacrificed his life for the country at age 22,” Moon said.

“But as times have passed, his grave has become a site without family members to look after. The Republic of Korea will not leave these patriots alone.”

It was the first time a president visited graves of soldiers who had no surviving relatives. Honoring ordinary citizens who put their lives on the line for the sake of others, Moon said, “To bereaved families, it is a lifelong grief and longing. But they have awakened us to the fact that we all have a sense of bravery in our hearts to help others.”