Security to be ultra-tight for Trump-Kim summit

Security to be ultra-tight for Trump-Kim summit 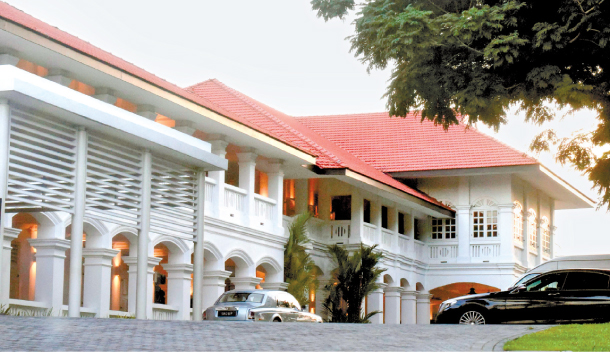 The Capella Hotel on Sentosa Island in Singapore where U.S. President Donald Trump and North Korean leader Kim Jong-un will hold a summit on June 12. [AP/YONHAP]

The Capella Hotel on Singapore’s resort island of Sentosa was named the venue for next week’s historic summit between U.S. President Donald Trump and North Korean leader Kim Jong-un by the White House on Wednesday.

The much-anticipated summit is scheduled for 9 a.m. local time on June 12, and the announcement of the venue comes after U.S. and North Korean logistics teams scoured the Southeast Asian city-state last week for an optimal location.

After revealing the time of the meeting on Monday, Sarah Huckabee Sanders, the White House press secretary, tweeted: “UPDATE: The venue for the Singapore summit between @POTUS [the president of the United States] and Leader Kim Jong Un will be the Capella Hotel on Sentosa Island. We thank our great Singaporean hosts for their hospitality.”

The Singapore government, through a public order act, established a special event area in Tanglin, around the Shangri-La Hotel, on Monday and around the Capella Hotel Tuesday. It will take effect from June 10 to 14 and strictly limit access to those areas.

The special event area around the Capella encompasses all of Sentosa Island, waters off its southwest coast and the Sentosa Gateway. People and vehicles passing through these special zones during the designated period will face restrictions and strict security measures.

Airspace over Singapore will also be restricted between June 11 to 13, according to a notice posted by the International Civil Aviation Organization and U.S. Federal Aviation Administration Wednesday, “for reasons of national security.”

Ahead of the announcement of the venue of the summit, Trump tweeted on Tuesday, “Meeting in Singapore with North Korea will hopefully be the start of something big…we will soon see!”

The summit was briefly called off by Trump through a public letter on May 24, but has been back on track since with multiple teams working on both the logistics and the agenda for the summit. The talks were further cemented after Kim Yong-chol, the influential vice chairman of the North Korean Workers’ Party’s Central Committee, hand-delivered a letter from Kim Jong-un to Trump at the White House last Friday. 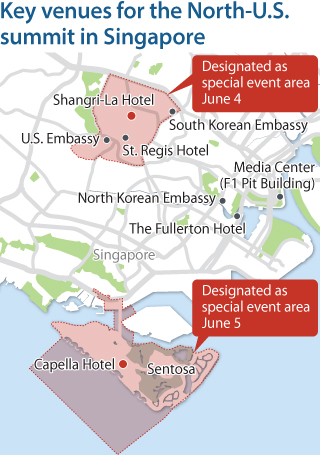 Trump told reporters at the White House on Tuesday that the summit is “moving along very well,” and that “it’ll be a very important couple of days.”

The Capella Singapore, a luxury hotel on the island, was seen as the likely venue for the summit between Trump and Kim as a U.S. delegation led by Joe Hagin, the deputy White House chief of staff for operations, resided there last week during meetings with North Korean officials.

The North Korean delegation, led by Kim Chang-son, director of the North’s State Affairs Commission Secretariat, considered a chief of staff to Kim Jong-un, stayed at The Fullerton Hotel, known for its proximity to the North Korean Embassy in Singapore.

The North Korean officials also visited the St. Regis Singapore last week. Those two luxury hotels were considered top candidates for where leader Kim might stay during the summit.

The island, a pirate hideout, was transformed from a British military base in the colonial period to a tourist attraction starting in 1972 after it was renamed Sentosa, which means “peace and tranquility” in Malay. Linked to the mainland by causeway, cable car and monorail, it is ideal for security.

The 112-room Capella Hotel opened in 2009 and was designed by the British architect Norman Foster, boasting colonial and modern buildings, surrounded by a rainforest. It has two presidential suites, meeting rooms with full-length windows that overlook the South China Sea, and is walking distance from a major golf course.

The Straits Times of Singapore reported Wednesday that a “special zone” has been marked within the two special event areas, where checks will be even stricter.

Both the Shangri-La and St. Regis hotels, located in Tanglin, reportedly fall within a special zone. Capella is located in the smaller zone on Sentosa.

Kim Chang-son, who flew into Singapore on May 28 to meet with the U.S. team led by Hagin, was spotted at the Beijing Capital International Airport Wednesday.

Kyodo News reported Wednesday that he may return to Pyongyang to report to Kim Jong-un on the results of his negotiations with the U.S. officials ahead of the summit, which would indicate that logistical preparations for the summit have concluded.

With global interest in seeing how the first North-U.S. summit unfolds, more than 3,000 journalists are expected to work out of the F1 Pit Building’s media center to cover the summit. That main media center is close to neither of the special event zones.

On the possibility of an official declaration of the end of the 1950-53 Korean War, which ended in armistice, and the signing of a peace treaty, Nauert said, “I don’t want to speculate on the timing or what may or may not happen. I know that that’s something that the president and this administration certainly supports.”

The South Korean Ministry of Foreign Affairs has sent a team of protocol officials to Singapore since Sunday, according to various government sources. The delegation also includes Blue House officials.

They could be gearing up for the possibility of the North-U.S. summit leading to trilateral talks involving South Korea, but the Blue House has been hesitant in confirming the purpose of their visit. Officials have only said that they are preparing for President Moon Jae-in’s visit to Singapore in July.

U.S. Ambassador to the Philippines Sung Kim, a former nuclear envoy, and North Korean Vice Foreign Minister Choe Son-hui kicked off another round of talks in the truce village of Panmunjom at the inter-Korean border Wednesday in what is seen as final preparation for the summit, just six days away.

The two sides have held five rounds of talks since May 27 at the Tongilgak building on the northern side of Panmunjom in the demilitarized zone to fine-tune details of the North’s denuclearization process, and in turn, security guarantees for the regime.

Trump last Friday said that his summit with North Korea will “start a process,” acknowledging the complexity of the process of denuclearizing the Korean Peninsula.