Footballers get stylish with their boots

Footballers get stylish with their boots 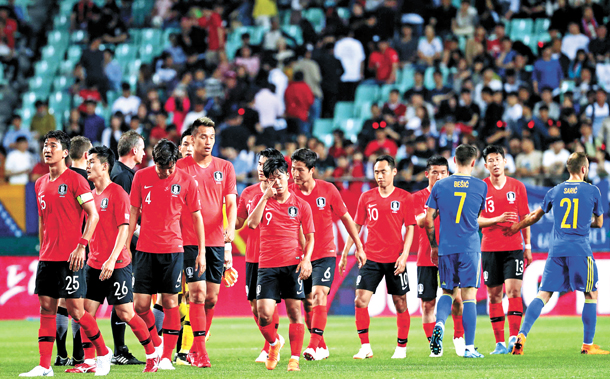 The Korean national football team, in red, walks off the field after a friendly match against Bosnia and Herzegovina at Jeonju World Cup Stadium on June 1. [NEWS1]

Aside from the goalkeepers, all the players on each team in the 2018 FIFA World Cup will wear the same colored, branded uniforms - except for what’s on their feet.

Football boots are the only parts of the players’ outfits that they have full control over. As the sport is played using the feet, football players are allowed to wear the boots of their choice to maximize their ability on the field.

In the early 2000s, football boot manufacturers focused on making boots lighter, decreasing the weight of one shoe to nearly 100 grams. In the past, one boot could weight up to 300 grams.

When the lighter football boots were first released, players complimented them, with many saying that they were so light that they didn’t even feel like they had anything on their feet.

However, some argued that lighter boots may increase the risk of injury. Recently, many players have turned away from the lighter boots.

Players used to choose their football boots based on their position, but recently, they’ve made decisions based on their individual style of play. It used to be normal for players playing the same position to wear the same brand of boots, but now most of them wear different types.

The 23 players on the Korean national football team wear boots from four different brands ? Nike, Mizuno, Adidas and Puma. About half of the players wear Nike, and only one player, goalkeeper Kim Jin-hyeon of Cerezo Osaka wears Puma. Compared to the Korean team that played in the 2014 Brazil World Cup, more players prefer Nike now and fewer players wear Adidas.

Son Heung-min of Tottenham Hotspur wears the Adidas X 18, which is designed for speedy players. Notable players like Luis Suarez of Uruguay, Mohamed Salah of Egypt and James Rodriguez of Colombia wear the same model.

Lee Seung-woo of Hellas Verona wears the Adidas Nemeziz 18+. This boot is designed for players who use their ankle muscles to make abrupt changes in direction during the match. Lionel Messi of Argentina wears the same brand as Lee.

While these two prefer Adidas, Ki Sung-yueng of Swansea City, also the captain of the Korean national football team, wears Nike’s Magista Obra2. Nike explained that the model is designed to improve pass accuracy by making the sole of the boots less slippery.

Kim Shin-wook of Jeonbuk Hyundai Motors, the national team’s tallest player at 1.97 meters, wears Mizuno’s Morelia Neo II. Made of kangaroo leather, the model is considered to be very comfortable. The boot is preferred by players who jump for balls a lot.

Aside from their effects on the performance of the players, different football boots allow each player to differentiate themselves from others with unique designs and eye-popping colors. The bright colors of the boots allow fans to spot their favorite players easily.

During the World Cup, Son will wear blue football boots while Lee will wear orange and Kim will wear red. However, for those players wearing Nike boots, the fans will have a hard time telling them apart, as all of Nike’s boots will be white. Nike differentiated the design of its boots by giving the soles different colors.