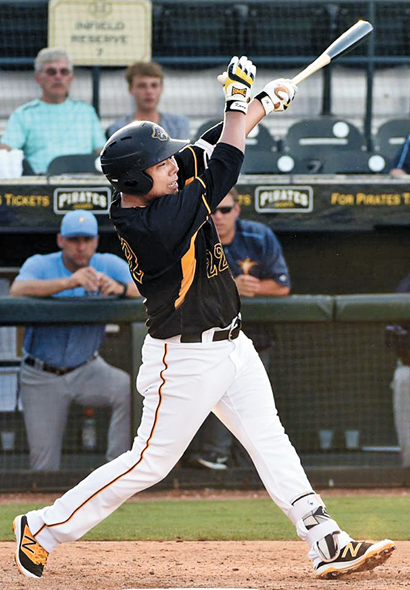 Kang Jung-ho at bat during a minor-league game against the Florida Fire Frogs at LECOM Park in Florida on Monday. [BRADENTON MARAUDERS]

The Pittsburgh Pirates’ Korean infielder Kang Jung-ho is tearing up the minor leagues as part of his comeback from legal troubles.

Batting third as designated hitter, Kang launched a solo shot for the Pirates’ Advanced Single-A team, Bradenton Marauders, in a 3-2 loss to the Florida Fire Frogs, an affiliate of the Atlanta Braves, at LECOM Park in Bradenton, Florida, on Wednesday.

The homer was Kang’s only hit of the game in four at-bats. He has three homers in five Single-A games so far, along with a .412 batting average (7-for-17) and eight RBIs.

Kang is looking to rejoin the Pirates this season after being granted a U.S. visa in April. He missed the entire 2017 season and the beginning of the current season following legal problems in Seoul. Throughout his absence in 2017, Kang didn’t receive any pay or even play in the minor leagues.

The third baseman/shortstop was arrested and charged with fleeing the scene of an accident after driving under the influence of alcohol in Seoul in December 2016. It was his third DUI arrest in Korea, and he received an eight-month jail term, suspended for two years, in March 2017. He lost his appeal two months later.

Though he avoided prison time, Kang was denied a work permit after his arrest and was unable to enter the United States to play for the Pirates. The club placed him on the restricted list in March 2017, and he remains there. Kang hasn’t received any pay or played in the major leagues since that move.

“I’m not touching a drop of alcohol moving forward,” Kang was quoted as saying by the Pittsburgh Post-Gazette.

But the former Korea Baseball Organization (KBO) All-Star finally got his break in April when his work permit was issued. He reported to the Pirates’ spring training facility in Bradenton soon afterward, with hopes of rejoining the Pirates this season.

Kang will likely make another stop in the minors with Triple-A Indianapolis before returning to the bigs. Kang is set to make $3 million this year, with a $5.5 million club option (or $250,000 buyout) for 2019.

Kang made his major league debut with the Pirates in 2015, signing a four-year contract for $11 million with an option for a fifth year.?Kang finished third in the NL Rookie of the Year voting in 2015 after batting .287 with 15 home runs and 58 RBIs in 126 games. The following year, the Korean had 21 homers and 62 RBIs, with a .255 batting average in 103 games. He is the first position player to jump from the KBO to the big leagues.