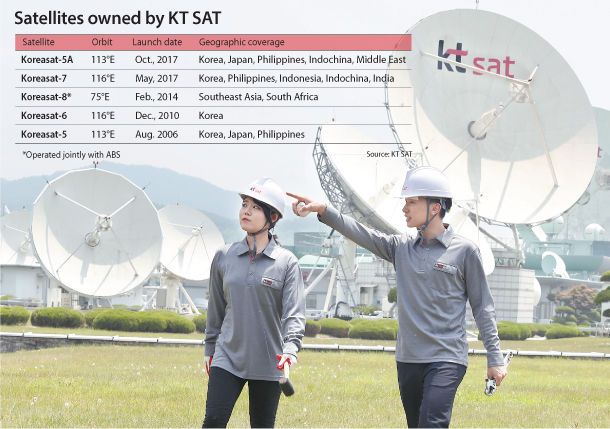 GEUMSAN COUNTY, South Chungcheong - Korea’s only satellite operator, KT SAT, opened its main service center - a facility protected by the country’s national security law - to a group of reporters for the first time on Thursday as the company celebrates its 48th anniversary this year.

The service center, located in a county surrounded by mountains that offer good weather conditions for building antenna farms, is a symbol of Korea’s satellite development. The center receives and transmits signals for television channels at home and abroad. It services telecommunication networks to isolated areas such as ships at sea, homes in mountains and even Antarctica.

Despite its secretive image, when this reporter visited the center on Thursday, it was recognizable from a distance thanks to 39 white satellite dishes. The oldest and largest - 27.3 meters (89.5 feet) in diameter - has been there since KT SAT, a wholly-owned subsidiary of the telecom company KT, started doing business about a half century ago and still stands next to the center’s main building.

First on the visit was a monitoring room for satellite-based telecommunications and broadcasting services. About four engineers are on standby at all times for any problems that occur in the global satellite network. According to Hahn Won-sic, chief executive of KT SAT, it is one of few centers in the world where engineers are on standby 24/7 to give back-end customer support.

One of the monitors in the room shows the stability of satellite networks connected to Korean embassies in various countries including Ghana, Iran and Tanzania. It also keeps track of the network connected to the King Sejong Station, a research institute set up under the Korean Antarctic research program. Even in the Antarctic, researchers are able to make phone calls, send emails and use the internet thanks to the satellite network.

The room also has a phone with a direct connection to North Korea. Byun Ha-rim, a manager at KT SAT, said it is only used when the two Koreas need to discuss an air traffic control issue.

A few steps away, another room monitors the internet connection on ships. The company offers unlimited data at a maximum of 2 megabits per second speed for around 1 or 2 million won ($935 to $1,870) a month depending on the transmission speed, according to Moon Tae-gon, a manager at KT SAT. In the room, the staff can monitor how much data each ship uses and trace where it is at sea.

Based on all the services it has been offering so far, KT SAT is now looking for new opportunities.

Until now, its business has been focused on the domestic market, but with the Koreasat-7 and Koreasat-5A satellites launched in May and October last year, the company can now offer broader geographic coverage. Koreasat 5A, for instance, can cover the East Sea to the Arabian Sea.

Another plan is to cooperate with KT affiliates on new technology, such as the mobile carrier’s 5G network. Once KT develops the next-generation high-speed network, the satellite operator plans to deliver the network to isolated areas through satellite beams. CEO Hahn Won-sic said it is impossible yet to replicate the same speeds and low-latency characteristics of 5G, but the two companies started a study last month on how to make 5G partly available on satellite networks.

KT SAT is also working on ways to apply the latest technologies to enhance data security. They include quantum cryptography, a technology known to offer a high level of hack-proof data security, and private blockchain, which saves data in distributed ledgers for transparent sharing of data between authorized partners.

Doing business with North Korea is also on the mind of KT SAT.

“Our satellite service could be the simplest and quickest way to connect the South and North with telecommunications and broadcasting services,” Hahn said, though he added the caveat that nothing is certain when it comes to inter-Korean business.

“There are uncertainties to whether the North would even want to air international and South Korean channels on TV,” a KT spokesman said.

Still, KT has established a task force to prepare for inter-Korean businesses, and the satellite operator plans to follow along with any direction set by its parent company.