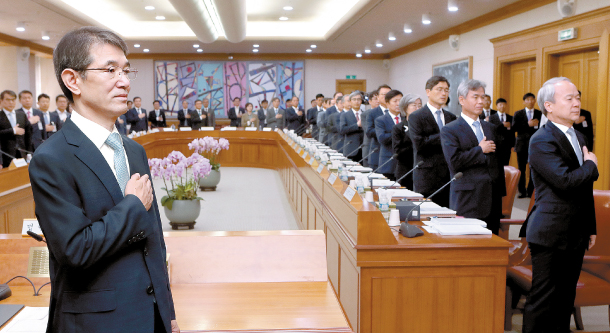 Top judges opposed a criminal investigation of former Supreme Court Chief Justice Yang Sung-tae for abuse of power on Thursday, saying they respected an internal investigation team’s recommendation not to seek charges against him.

“We accept with heavy hearts the results of the internal investigation and share responsibility over the fact that the power abuse allegations surrounding the judicial branch has seriously maimed the trust of the people in the judicial branch and its independence,” the heads of courts in Korea said in a statement on Thursday after an all-day meeting.

The internal investigation looked into allegations that Yang influenced decisions in the Supreme Court to curry favor with the government in power when he served as Supreme Court chief justice from 2011 to 2017.

The team reported last month that it found 174 documents in the computers of the National Court Administration, which conducts administrative work for the Supreme Court, and said the documents may prove that Yang violated judicial independence.

But the team did not recommend criminal charges against Yang and those involved in the allegations, saying there was not enough evidence. Judges at local courts around the country have been hosting internal meetings since the report.

The current chief justice, Kim Myeong-su, said he would decide whether to seek criminal charges against Yang and those involved in the allegations after hearing from judges, but they appear to be divided.

The statement on Thursday against a criminal investigation of Yang followed a statement on Tuesday by senior judges of the Seoul High Court who also opposed it.

But earlier in the week, judges at the Seoul Central District Court and Seoul Family Court issued statements supporting a criminal investigation.

“I think it’s normal that there are differing opinions,” Chief Justice Kim told reporters on Thursday morning. “All opinions are the result of the judges’ concern for the judicial branch. I will consider them all equally before making a decision.”