Liberals lead in polls ahead of elections

Liberals lead in polls ahead of elections 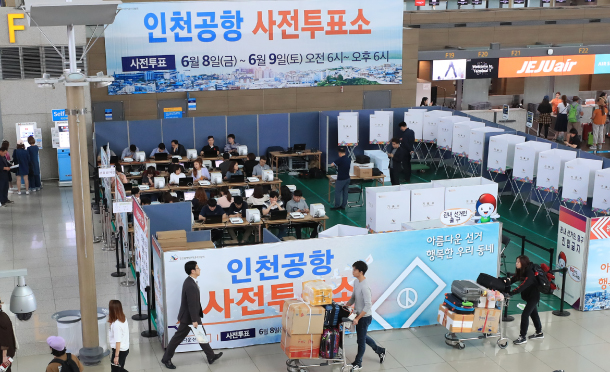 Officials from the National Election Commission set up ballot booths for early voting at the departure terminal of Incheon International Airport on Thursday. Early voting for the June 13 elections will begin at 6 a.m. on Friday and end at 6 p.m. on Saturday. [YONHAP]

The ruling party is poised to sweep major mayoral and gubernatorial seats in Wednesday’s elections, according to the latest poll figures from the JoongAng Ilbo.

Candidates of the liberal Democratic Party are leading in 14 out of 17 races, including in areas once considered conservative strongholds. The numbers suggest broad support for President Moon Jae-in’s party and represent a challenge for the Liberty Korea Party (LKP), which has been struggling to find its footing since the impeachment of Park Geun-hye, a conservative, last year.

Democratic candidates are leading in Busan, Ulsan and South Gyeongsang, according to the JoongAng Ilbo poll conducted between May 31 and June 4. All three regions have traditionally leaned to the right.

In Busan, Oh Keo-don is leading with 50.8 percent, while Suh Byung-soo, the incumbent mayor and LKP candidate, is in a distant second with 24.4 percent. The gap is well beyond the margin of error of plus or minus 3.5 percentage points.

In South Gyeongsang, Kim Kyoung-soo, a close ally of President Moon, has a comfortable 46 percent lead over Kim Tae-ho, a former South Gyeongsang governor and LKP contender, who is in second with 29.3 percent.

Kim Kyoung-soo is leading despite a scandal over his alleged involvement in a campaign by shady political operatives to manipulate online opinion in favor of President Moon during last year’s election.

In Ulsan, Song Chul-ho leads the mayoral race with 48.1 percent over the LKP’s Kim Gi-hyeon with 28.6 percent.

Other conservative bases are seeing tight races. In Daegu, the hometown of former President Park and arguably the most conservative city in the country, the sitting mayor and LKP candidate, Kwon Young-jin, is barely ahead of his Democratic rival, Rim Dae-yoon.

According to a poll conducted by Kantar Public, Korea Research and Hankook Research, Kwon is narrowly leading with 28.3 percent, while Rim commands 26.4 percent. The gap is within the margin of error of plus or minus 3.5 percentage points, making the race a tossup.

The poll involved 800 Daegu citizens and was conducted from Saturday to Tuesday. About 40 percent of respondents said they were undecided, making the next five days of campaigning crucial for both candidates. If Rim wins, he would be the city’s first liberal mayor.

The North Gyeongsang gubernatorial race is the only major contest where an LKP candidate is leading beyond the margin of error. Lee Cheol-soo has 29.4 percent of support, according to the same poll, while the Democratic Party’s Oh Jung-ki is in second with 21.8 percent. But the actual results could differ come Election Day since 43.7 percent of respondents said they were undecided.

In Seoul, the capital, incumbent Park Won-soon, who is seeking a third term, commands a dominating lead with 56.1 percent of support, according to the JoongAng poll, far ahead of the LKP’s Kim Moon-soo, who has 15.8 percent, and Ahn Cheol-soo of the centrist Bareunmirae Party, who has 14.9 percent.

Although there have been talks between Kim and Ahn to combine their candidacies - meaning one of them would have to drop out - their combined figures would still fall short of Park’s popularity.

Facing the prospect of losing all 17 major races in the country, the LKP is banking on the support of undecided voters and people who chose not to participate in polls ahead of Election Day.

“The election outcome may well hinge on how many of those ‘shy conservatives’ come out on Election Day and who they will cast ballots for,” said Bae Jong-chan, director of the polling firm Research & Research.

“While the current electoral landscape appears to favor the ruling party, which is riding high on positive approval ratings for President Moon Jae-in and the party, it is still premature to make such a definitive election prediction,” meaning one in favor of the Democratic Party.