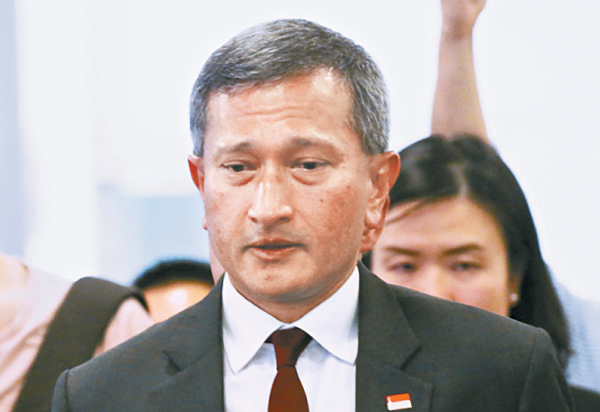 Singapore’s Foreign Ministry said in a brief statement Wednesday that top envoy Vivian Balakrishnan was making an official visit to Pyongyang on Thursday and Friday at the invitation of his North Korean counterpart, Ri Yong-ho.

The ministry did not give a specific reason for the visit but said Balakrishnan will also meet with Kim Yong-nam, the regime’s nominal head of state and president of the Presidium of the Supreme People’s Assembly. Balakrishnan was said to be accompanied by officials from his ministry.

The North’s state-run media did not mention the delegation’s arrival as of press time, but a South Korean official who spoke on the condition of anonymity confirmed the visit. The top envoy was seen at Beijing Capital International Airport on Thursday boarding an Air Koryo flight to Pyongyang.

Before his departure from Beijing, the Singaporean minister reportedly met with his Chinese counterpart Wang Yi, but China’s Foreign Ministry did not provide details of the meeting.

Balakrishnan’s trip to Pyongyang appears to come in line with Singapore’s preparation for the U.S.-North summit, set for next Tuesday at the Capella Hotel on the resort island of Sentosa.

The foreign minister made a working visit to Washington on Tuesday, during which he met with U.S. Secretary of State Mike Pompeo and National Security Advisor John Bolton to iron out details for the upcoming summit.

Balakrishnan told reporters at the time that Singapore didn’t volunteer to host the U.S.-North summit and that Washington approached it first, as Pyongyang did subsequently, essentially due to Singapore’s security management. “The first prerequisite that both sides are concerned with obviously is security,” he said. “You have two leaders for whom there is no shortage of security considerations. So knowing that all that is in hand is absolutely crucial.”

Balakrishnan might discuss summit expenses with North Korean officials, which appears to be a sticky issue in ongoing working-level meetings between the North and United States because cash-strapped Pyongyang has a reputation of forcing other countries to foot its bills.

The Washington Post reported last week, citing unnamed government sources, that the United States was open to covering accommodations for the North Korean delegation but that it was mindful Pyongyang may view the U.S. payment as insulting. Thus the United States was considering asking Singapore to foot the bill, said the report.

If the city-state relays an official invitation to Kim Jong-un for the summit next week, said Jung Chang-hyun, a North Korea expert who heads a modern history research institute, it could justify its payment without a loss of face for the leader.

Meanwhile, South Korea’s Unification Ministry, which handles relations with the North, announced Thursday that a 14-member team of local government officials and employees of Hyundai Asan and KT will visit the North Korean border town of Kaesong today for working-level discussions with North Korean officials on the opening of a liaison office there.

Under the Panmunjom Declaration signed between Kim and South Korean President Moon Jae-in on April 27 during their first summit, both Koreas agreed to establish a liaison office in Kaesong in order to “facilitate close consultation between the authorities as well as smooth exchanges and cooperation between the peoples.”

Kaesong is home to the now-defunct Kaesong Industrial Complex, which was the last vestige of inter-Korean economic cooperation before Seoul pulled out of the project in February 2016 following North Korea’s ballistic missile test and nuclear experiment that year.