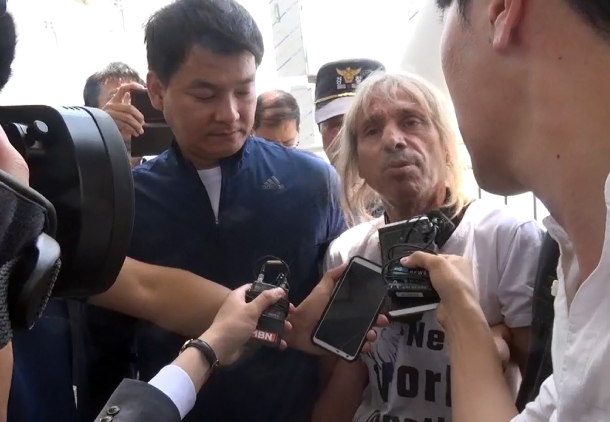 Renowned urban climber Alain Robert talks to the press following his arrest after trying to climb the Lotte World Tower in southern Seoul on Tuesday. [YONHAP]

An internationally known daredevil was arrested while attempting to scale the Lotte World Tower - Korea’s tallest building - barehanded in southern Seoul on Wednesday.

Alain Robert, 55, known as the “French Spiderman,” is possibly the most famous urban climber in the world, with conquests like the Burj Khalifa, Taipei 101, Eiffel Tower and the Empire State Building all under his belt.

On Wednesday, his ambition was the 123-floor Lotte World Tower, currently the world’s fifth-tallest building, which was opened to the public in April 2017.

Like many of his previous climbs, he had no permission from local authorities, and began his ascent at 7:55 a.m. without any safety equipment - using only his bare hands. To evade building security, he had two helpers distract guards.

His ability to perform such daring feats is owed to his extensive training in rock climbing, through which he has learned to hang onto protrusions on buildings’ facades such as windows or ledges to pull himself up.

At around 8 a.m., the Songpa District Fire Department received a notice that a person looking like a foreigner was climbing up the tower.

Fourteen fire trucks and 65 rescue personnel were deployed to the tower, and air mattresses were inflated around the location in case Robert fell.

The rescue team of police and firefighters eventually rode on a gondola used to clean the building’s exterior to reach Robert, who had reached the 75th floor three hours after he began his ascent.

The authorities persuaded him to stop and then proceeded to carry him in the gondola to the roof, where he was placed under arrest at 11:45 a.m. After his arrest, Robert told the police that he attempted the climb to celebrate the recent atmosphere of rapprochement on the Korean Peninsula.

“I may get a hefty fine but I did it because of what is happening now between South Korea and North Korea,” Robert said. “That is my way of saying thank you to Kim Jong-un and Moon Jae-in.”

The police will decide what to do with Robert after further investigation of his motives.

So far, only three people have succeeded in climbing the 555-meter (1,820-foot) Lotte World Tower. Kim Ja-in, Korea’s top female climber, reached the top last May albeit with permission and safety equipment.

Her feat was broadcast live on Youtube and was performed as part of a publicity event for the tower.

The other case involved a Ukrainian climbing duo, Vitaliy Raskalov, 21, and Vadim Makhorov, 25, who evaded building security and scaled the skyscraper when it was still partly under construction in April 2016.