KIM SUNG-TAK
*The author is a London correspondent for the JoongAng Ilbo. 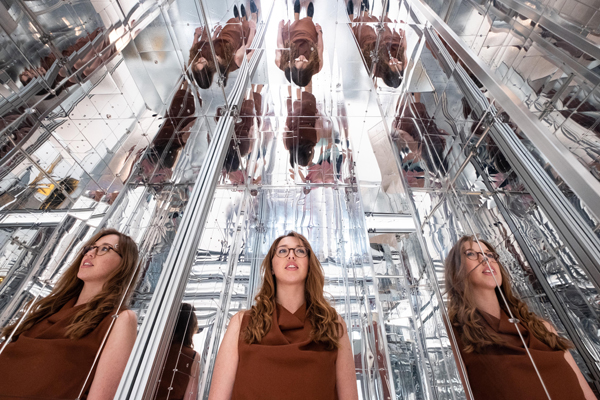 The Hayward Gallery in the Southbank Center by the River Thames in London celebrates its 50th anniversary in July. At the same time, Korean installation artist Lee Bul’s special exhibition featuring 30 years of his work is ongoing.

Lee garnered international attention through her work featuring beads on dead fish at the Museum of Modern Art in New York in 1997. The Guardian described Lee’s exhibition as one of “beauty with menace.” Her work featuring glass hands with butterflies trapped inside was “a jab on our idea of oriental femininity, specifically Puccini’s Madam Butterfly.”

The North Korean nuclear threat has been the biggest topic in Korean Peninsula affairs, but changes can be felt in the stores of Soho.
A mask shop had faces of U.S. President Donald Trump and North Korean leader Kim Jong-un on display. Kim, with his unique hairstyle, was featured in an advertising campaign on a London Tube station.

As inter-Korean and U.S.-North talks continue over the nuclear issue, local scholars and experts hold seminars and symposiums almost every week. In time for the U.S.-North summit, Chatham House, the Royal Institute of International Affairs and other institutes have scheduled conferences.

An event is also planned to review the economic policies of the first year of the Moon Jae-in administration. In my observation, the unprecedented interest in Korea started with the PyeongChang Winter Olympics.

The experts who had been skeptical of the resolution of nuclear tensions even after witnessing the exchanges and talks between Seoul and Pyongyang are surprised by the progress.

The changes in the Korean Peninsula up to the U.S.-North summit is a road that has never been taken. I have had interviews with London experts on whether Trump would accept Pyongyang’s proposal for a talk and whether the summit would actually happen, only to need to do follow-up interviews again the next day. Their predictions based on past data and experiences repeatedly missed the mark.
What sets the current situation apart from the past is that South Korea is at the center of the changes in the Korean Peninsula. With the local election approaching, there are both concerns and hope for inter-Korean relations and the possible resolution of the North Korean nuclear threats.

However, the “Korea boom” in London, which had been nonchalant about Korean Peninsula affairs in the past, shows that Korea can take an initiative in writing their own history, regardless of the result.