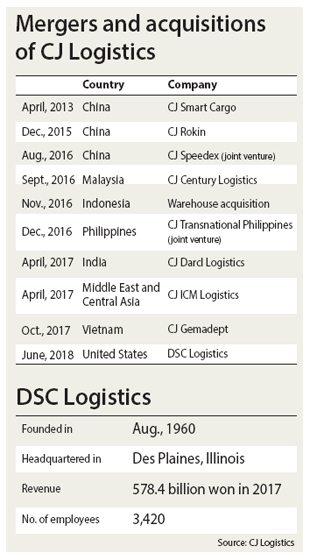 CJ Logistics signed a deal to acquire America-based DSC Logistics at $216.36 million with the aim of bolstering its business in the U.S., the company said Friday.

The DSC acquisition marks the first time that CJ Logistics has acquired a U.S. company. The deal is the largest since the Korean company acquired China’s Rokin Logistics, now CJ Rokin, for 455 billion won ($422.6 million) in 2015.

CJ Logistics USA, a wholly owned subsidiary, will acquire 90 percent of DSC by November this year. The Korean conglomerate may decide to purchase the remaining 10 percent in the future, depending on the company’s performance.

DSC specializes in warehousing and delivery of food and consumer goods. According to CJ, DSC operates over 50 warehouses spread across the U.S. The company’s total warehousing area adds up to roughly 22.6 million square feet, equivalent to the size of 300 soccer fields. The Korean company hopes to exploit DSC’s local network built during the last half-decade after the company was founded in 1960.

“About half the major customers of DSC Logistics are long-term clients that have worked with the company for over 10 years,” a spokesperson from CJ Logistics said. “It is proof that the company is able to offer stable and quality service.”

As the Korean company already has some logistics business in America, it is hoping to integrate DSC’s local network and its existing business infrastructure. According to CJ, it operates 30 distribution hubs and 15 warehouses spread across the U.S. as well as Canada, Mexico and Brazil.

“This acquisition will be a major step forward in expanding our presence in the U.S. market, a mainstream logistics market, following our penetration into the Chinese and Southeast Asian markets,” said Park Keun-tae, CEO of CJ Logistics.

The logistics company has been aggressively acquiring businesses around the world since 2013 with the goal of becoming one of the top five logistics operators in the world by 2020.

While past deals have been focused on China and Southeast Asian countries like Malaysia, the Philippines and Vietnam, the company now hopes to bolster its business in developed countries as well.

To expand its business in Eurasia, CJ recently launched its Eurasia Bridge Service, which will use Trans China Railway trains and trucks to transport goods directly from China to Europe. It is one of the company’s first steps toward accomplishing its goal of developing services that will link 30 major European cities and 24 Asian countries in the future. Currently, CJ Logistics’ global service covers 137 cities in 32 countries.

Apart from its aggressive expansion strategy, it is also beefing up R&D to enable drone deliveries, autonomous package sorting and robot use within warehouses through its TES Innovation Center in Korea and in China to go shoulder-to-shoulder in technology development with multinational logistics firms.