Trump says agreement to end Korean War could be signed

Trump says agreement to end Korean War could be signed 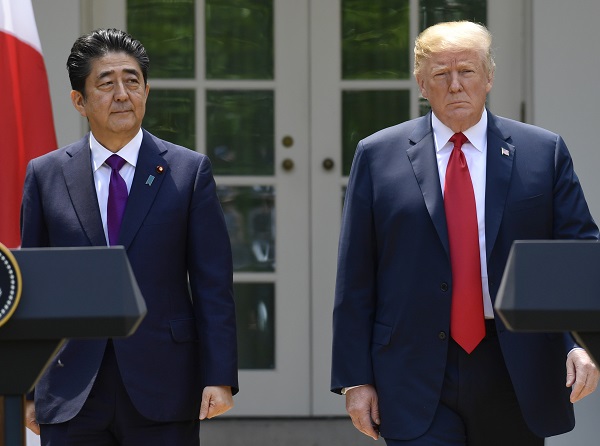 U.S. President Donald Trump said Thursday he could “sign an agreement” to end the Korean War at an upcoming North Korea-U.S. summit in Singapore next Tuesday.

“We could sign an agreement. As you know, that would be a first step,” said Trump, noting that signing such an accord to end the war would be “probably the easy part; the hard part remains after that.”

Trump did not go into detail over how such an agreement declaring an end to the war might be signed, or whether it would be done in a three-way summit among himself, North Korean leader Kim Jong-un and South Korean President Moon Jae-in.

His remarks, made during a joint press conference with Prime Minister Shinzo Abe of Japan at the White House following a summit meeting, came amidst speculation Moon could join the two leaders in Singapore to declare a formal end to the 1950-53 conflict.

If Moon were to join the two, a trilateral meeting could take place next Wednesday. CNN reported Thursday that talks between Trump and Kim could be extended to a second day, citing anonymous sources. A contingency plan has reportedly been established for a possible second day of summit talks, which could be a sign of Moon joining Trump and Kim.

The Korean War broke out when the Soviet-backed North Korean army invaded an ill-prepared South Korea in the early hours of June 25, 1950. Three years of fighting devastated the peninsula and countless lives were lost, both among civilians and military servicemen.

The war ended in a truce, not a peace treaty, on July 27, 1953, leaving the Koreas still technically at war and making the inter-Korean border one of the most heavily fortified zones in the world.

While the armistice was signed by the U.S.-led United Nations Command and North Korean and Chinese militaries on July 27, 1953, Moon suggested that a declaration to formally end the war could be done by the two Koreas and the United States, without China taking part, as it would take the form of a political statement.

The Blue House continued to be cautious on Friday about the prospects of Moon flying to Singapore. When asked about the possibility, a senior presidential official said there was no comment to be made.

The Blue House has been careful not to affect ongoing preparations between Pyongyang and Washington for the highly anticipated June 12 summit, often sidestepping reporters’ questions on Moon’s possible role.

Trump also said Kim could be “invited” to the U.S., preferably the White House, if the summit went well.

“I think it would be well received. I think he would look at it very favorable. So I think that could happen,” he said.

“Maybe we’ll start with the White House. What do you think?” he continued.

Trump also said he would “walk away” from the talks if he was not happy. “All I can say is I am totally prepared to walk away. I did it once before,” he said, referring to his abrupt decision on May 25 to cancel his summit with Kim in what many saw as a textbook move from his bestselling book “The Art of the Deal.”

On normalizing relations with the North, Trump said it was something “I would expect to do, I would hope to do, when everything is complete,” referring to implementations of nuclear agreements to be forged in upcoming summit talks.

Prime Minister Abe said at the top of priority list he has with respect to North Korea is the solving of the issue of abductees. “Of course, on the issue of abduction, we have to resolve this problem. With the Abe administration, this is of the highest priority,” the prime minister said.

Praising Trump as “one of the leaders who understands the issue the most,” Abe said the “importance of abductions would be explained” to Kim at the summit Tuesday.