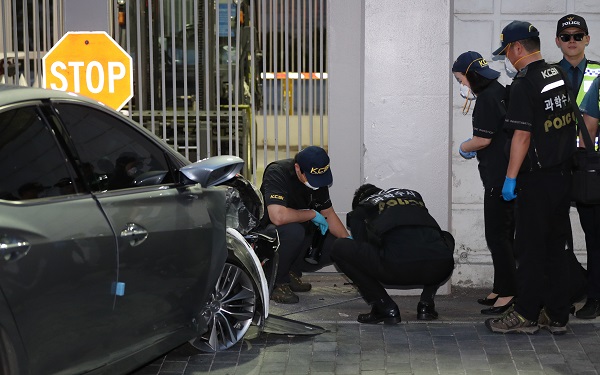 A forensic team of the Seoul police examines the scene on Thursday night where an official from the Ministry of Gender Equality and Family rammed a sedan into the front gate of the U.S. Embassy in central Seoul. [YONHAP]

The Gender Equality Ministry official who rammed a car into the gate of the U.S. embassy building in central Seoul Thursday evening told the police that he believed he could get political asylum in the United States that way.

The 47-year-old official, identified by the surname Yoon, was immediately arrested after driving a sedan into the embassy’s steel gate at around 7:22 p.m. He told police on the spot that he had a story to tell involving North Korea and that he wanted asylum in the United States.

A director at the Ministry of Gender Equality and Family, Yoon worked at the main government complex across the street from the embassy but left earlier that morning after taking a half-day off.

The owner of the vehicle was a woman working for a government agency under the Gender Equality Ministry’s purview, who was riding in the front passenger seat when Yoon crashed the car. Her job was to provide legal advice to the ministry, and she told the police after the incident that Yoon had called her that day to consult her.

After meeting him at Seoul Station, the woman said Yoon asked to drive and that she handed over control of the vehicle without suspicion. According to witnesses, the car was on the boulevard next to the embassy when it abruptly changed direction and slammed into the embassy gate.

There were no casualties, but Yoon cried for help as he was overpowered by the police and taken into custody. A sobriety test showed he was not drunk at the time.

“I was possessed by a spirit and was not my own self,” Yoon told police in subsequent questioning. “I had the delusion that if I applied for asylum after crashing into the U.S. embassy gate, I would be allowed to go to the United States.”

Yoon also added that he had undergone psychiatric treatment twice before, and that his delusions became aggravated by stress from studying English after he was selected by the ministry as a candidate for a study abroad program in the United States.

The Ministry of Gender Equality and Family, however, refuted many of his claims, saying that Yoon has not taken sick leave for psychiatric treatment in the last five years, nor worked on any matters related to North Korea. He has been relieved of his position and disciplinary action based on the State Public Officials Act will be considered after further details are known.

The Jongno Police Precinct said it will continue to investigate Yoon’s reason for crashing the car on charges of special property damage.