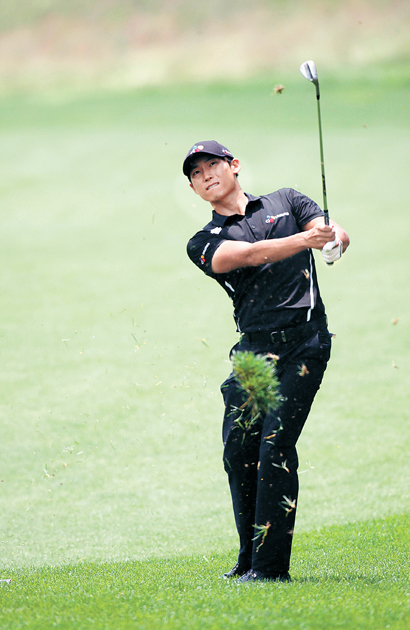 Hyun seemed to have the edge until the par-4 12th, up by two. Kim quickly made his move over the next two holes, winning both to bring the match to a tie.

As the two continued to tie over the next three holes, the match play had to wait until the last hole. While Kim hit the fairway, Hyun missed his tee shot, ending up in a bunker. Despite having only about 50 meters (164 feet) remaining for his third shot, Kim wasn’t able to get it close enough for a birdie. Since Hyun also had a long putt for a birdie, it all came down to a nail-biting short putt on the par-5 18th.

It looked like it was going to be Hyun’s day, and his putt appeared to be on target. It wasn’t to be, however, as Hyun’s shot circled the rim before jumping out and Kim stepped up to make his putt. Kim was declared this year’s match play champion, winning for the first time in six years.

“Hyun was playing really well,” Kim said after the win. “I feel like I was rather lucky, since I was able to win because Hyun made mistakes toward the end of the round.”

“I was making my game so difficult so I doubted myself at one point, whether I could win or not,” Kim said after the win. “It feels good to win.”

After winning a gold medal at the 2010 Asian Games in Guangzhou as an amateur, Kim turned professional in 2010 and since then he has had one KPGA tour victory at the 2012 Shinhan Donghae Open.

Kim then went on to the 2012 PGA Tour qualifying school, where he led the field in the second and third round. Since Kim wasn’t able to finish in the top 25, at 43rd, he earned Web.com Tour status. After playing on the Web.com tour in 2013 and 2014, Kim started playing on the PGA tour in 2015.

Last season, Kim started to make an impression on the PGA Tour, with two top-10 finishes and five top-25 finishes. This season, Kim’s best finish was last weekend, tied for 29th at the Memorial Tournament presented by Nationwide.

After a week off, Kim will be heading back to the United States to continue his season on the PGA Tour.

In the consolation match, Lee Hyng-joon and Maeng Dong-seop finished the tournament tied for third, as they finished the match all square. Lee was one up heading into the final hole but Maeng stuck his third shot for a birdie to square the match.

On the women’s Tour, Lee Seung-hyun won the S-Oil Championship with a final round score of eight under par, 64, at Jeju Elysian Country Club on Sunday.

With eight birdies, Lee finished the tournament at 17 under par, 199, to finish three shots ahead of Lee Jeong-eun. Throughout the tournament, Lee Seung-hyun did not make a single bogey, becoming only the fifth player in KLPGA Tour history to win a tournament without making a bogey.