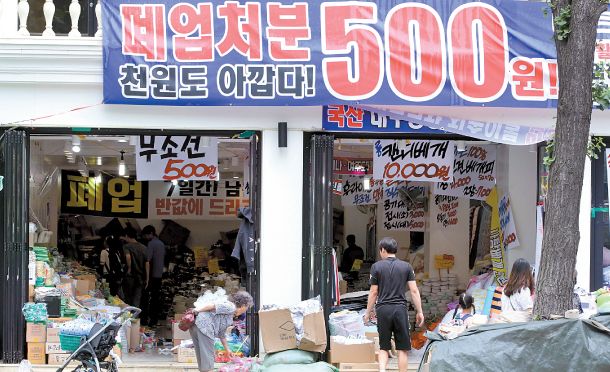 A store in Jongno District, central Seoul, sells most of its merchandise for 500 won (＄0.47) on Sunday as part of its closing sale. With profits shrinking, many small shops are shutting down. [YONHAP]

Korea’s self-employed are facing a tough environment amid shrinking domestic consumption, the rising minimum wage and dwindling numbers of tourists. The earnings growth for the self-employed hit a six-year low in 2017, increasing just 1 percent over 2016, according to the Bank of Korea and Statistics Korea on Sunday.

The latest data shows a steep drop, as the growth rate hovered above 2 percent for the past two years.

The downbeat earnings affected the overall production of the service sector in 2017, where self-employment is dominant. Restaurant earnings fell by 3.1 percent last year compared to 2016, the highest drop since the institutions started keeping records in 2000. 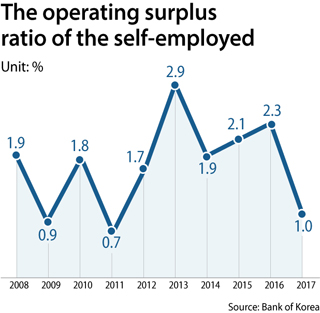 Food and beverage production in Korea also declined by 9.2 percent, the steepest drop since 2001’s 9.4 percent decrease, as supermarkets and retailers had poor sales that year. Experts say that mom-and-pop store owners were hit by the drop in the number of tourists last year, which drove sales for small shops in recent years.

The number of foreign tourists coming to Korea dropped by more than 23 percent last year. They were affected by China’s ban on group tours to Korea after Seoul deployed a U.S. missile shield that China believes threatens its security.

After Beijing imposed the restriction on tourists in March, the number of Chinese coming into the country fell sharply. Between January and October 2017, 3.5 million tourists entered Korea, compared to 7 million over the same period in 2016.

The reduction dealt a huge blow to Korea’s tourism industry, including small retailers, since Chinese people accounted for more than half of the total number of tourists.

Observers cited a steep increase in minimum wage under the Moon Jae-in administration as a factor that dragged down the profits of the self-employed. Since employers who pay the minimum wage are mostly self-employed shop owners or small-scale merchants or manufactures, higher labor costs lead to reduced profits and more layoffs of part-time workers.

The number of those employed in the lodging and dining services sector fell for nine straight months, and 54 percent of self-employed individuals said they now take home less income than a year ago, according to a survey by the Korea Economic Research Institute.

Besides these external factors, as more people choose to start their own businesses, it is becoming harder to maintain healthy sales and profit due to heavy competition.

Korea ranks third among members of the Organisation for Economic Co-operation and Development in self-employed workers, with nearly 5.6 million people operating their own business.

According to an OECD report published on Sunday, entitled “Entrepreneurship at a Glance,” Korea has 5.56 million self-employed people, putting it in third place after Mexico and the United States.