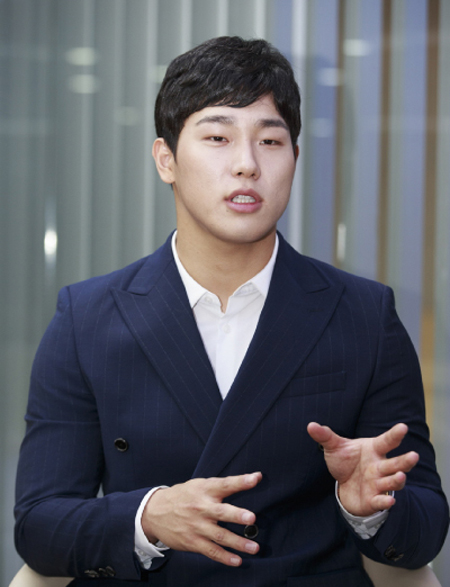 BUSAN - Global sports fans will still remember the powerful performance of Korea’s “Iron Man” Yun Sung-bin showed off at the 2018 Winter Olympics to proudly claim the gold medal in skeleton. It was the first time an athlete outside of North America and Europe won a medal for a sliding sport in the Olympics.

Impressed by his powerful and agile performance, BMW Korea signed up the 24-year-old Yun as a brand ambassador for its X series SUV lineup.

“Yun was calm even when he was sliding down the course at 140 km/h speed,” Kim Hyo-joon, chairman of BMW Korea explained. “BMW Korea thought his power, speed and confidence matched perfectly well with BMW’s X series,” he added.

Yun received a new X3 midsize SUV to get a firsthand experience of the X family. Yun said he has never owned an imported vehicle before.

A group of Korean reporters sat down with the Olympian on Thursday at the just kicked-off Busan International Motor Show to hear more about his first impression of the car and his future plans as the X series’ ambassador.

Q. What was your image of BMW before becoming an ambassador?

A. My impression of BMW was that it was a car for young and successful people. I am not lying: my actual dream car was BMW’s X5 since I was young because of its big and muscular image.

How did you feel when you heard that you would become an ambassador for BMW’s X family?

I was more than happy to do so. It was the type of a car that I needed in my daily life because I have a lot to carry around for training. All the more, it is a trend to have a car that is practical these days. I thought it well-suited to my image. I actually don’t have much time to drive around because of my training schedule. But with this car, I would like to take trips to here and there in Korea without time constraints. I think I will be able to sell at least two X3s to my friends and colleagues.

So it has been a week or so since you started driving your X3. How do you feel about it?

I consider performance very important when evaluating a car and in that sense, the X3 was very much above my expectations. I enjoy dynamic and sometimes wild driving and the X3 was able to deliver very strong torque. Most imported cars are known to have stiff steering wheels, but I didn’t get such a feeling when driving the X3. I think such a feeling would appeal very much to Koreans.

Did feel a similarity between a skeleton race and driving the X3?

It is much more thrilling to drive a car than sliding in a skeleton race because even if you say it feels as if you are sliding down at 300km/h, I have to be in control of the sled and there is a limit to how much thrill I can feel. I just know that I am running and that I am sliding down. Nothing more. A man’s speed cannot catch up to a car’s speed.