A daughter tests her mother’s love: In Yang Mingming’s ‘Girls Always Happy,’ a family is anything but

A daughter tests her mother’s love: In Yang Mingming’s ‘Girls Always Happy,’ a family is anything but 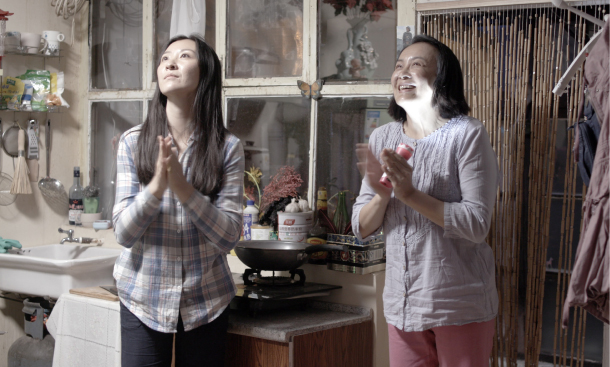 Actor-director Yang Mingming, left, plays a twenty-something daughter with a complex yet relatable relationship to her widowed mother in her directorial debut “Girls Always Happy,” which she also wrote. Yang was honored with the Best Director award at the 20th Seoul International Women’s Film Festival. [SEOUL INTERNATIONAL WOMEN’S FILM FESTIVAL]

The bonds between mothers and daughters are often fraught with conflict. The turbulent relationship between mothers and daughters was the subject of Greta Gerwig’s award-winning directorial debut “Lady Bird,” set in Sacramento, California. Yang Mingming, another rookie director, tackles the complex relationship in her first feature film, “Girls Always Happy,” which premiered in Korea at the 20th Seoul International Women’s Film Festival, which closed on June 7.

The Chinese film won the Best Director award in the International Feature Competition. The film, which Yang also wrote and starred in, was also shown in the Panorama section at the 68th Berlin International Film Festival.

Set in the narrow hutong (alleyways) of Beijing, “Girls Always Happy” follows a twenty-something recent university graduate named Wu (Yang), who lives with her widowed mother (Nai An). The lower-middle-class mother and daughter pair are both writers. Wu is a screenwriter, though she doesn’t have a stable income, and her mother occasionally writes poems and novels as a hobby.

Though the two clearly care for each other, their words to each other are often like daggers that tear each other’s hearts apart. They can’t get through a single meal without furiously bickering over everything - mostly starting with the mother’s nonstop criticism of Wu.

She makes problems out of everything for Wu, from her table manners to money and her appearance. She says her daughter is “worse than a dog” without a second thought, and even tells her daughter straight to her face that her life would have been much better if she had not given birth to her.

But Wu also knows how get her mother mad. When her mother fiercely scolds her at a department store for tilting her head while looking into the mirror - because that “makes you look incompetent” - Wu tilts her head further and walks around the store to get her mom’s temper going.

Wu’s attitude toward her mom does not just stem from her annoyance at her nagging, but also from her resentment over her mother’s past choices, including squandering the opportunity to receive a decent relocation payout after they were forced to leave their home.

Wu’s stubborn personality is also highlighted through her romantic relationship with a middle-aged man, a film professor who divorced twice in the past. As if to escape from her tiring and frustrating relationship with her mom, Wu acts like a pampered child in front of her boyfriend, and gets mad when things do not go quite as she wants.

Wu’s mother, who carefully takes care of her own father to secure her inheritance, also tries to escape her reality through a romantic relationship with an old acquaintance, who recently divorced. It’s a contrived relationship that is clearly intended to draw a connection between Wu and her mother over their problems with men.

When the mother’s relationship ends, her anger is once again directed at her daughter.

But when Wu snaps back, her mother breaks out crying and demands recognition for everything she had to go through as a single mother raising and educating Wu. Eventually, she finally speaks about her deepest concern - her fear of being left alone.

This mother-daughter pair’s tumultuous relationship is ultimately derived from the fear of growing old alone, and Wu’s resentment toward her mom’s past choices and their current financial struggles. Despite all of this, “Girls Always Happy” highlights the inner joy the duo find in their companionship.