Kim Jong-un arrives in Singapore, with Trump set to follow

Kim Jong-un arrives in Singapore, with Trump set to follow 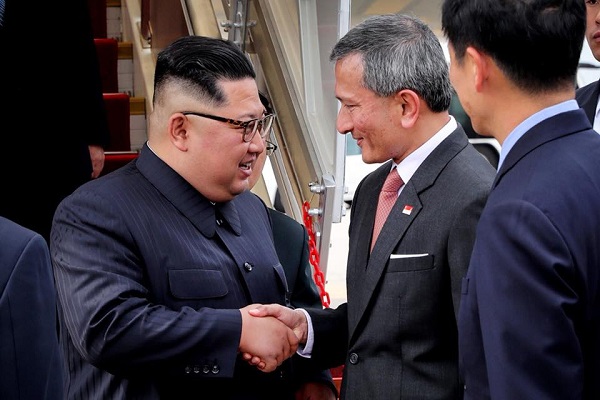 North Korean leader Kim Jong-un and U.S. President Donald Trump are both set to arrive in Singapore on Sunday, which will give them ample time to prepare for their historic summit in the island country scheduled for Tuesday.

The leaders are each scheduled to meet separately with Singaporean Prime Minister Lee Hsien Loong, according to Singapore’s Ministry of Foreign Affairs in a statement released on Sunday. Kim’s meeting with Lee was scheduled for later Sunday and Trump’s for Monday.

A Chinese private jet, which discretely arrived in Pyongyang from Beijing, was reported to have been spotted flying to Singapore. It was expected to be carrying North Korean leader Kim Jong-un.

The Straits Times of Singapore reported that an Air China flight believed to be carrying Kim arrived at Singapore’s Changi Airport a little past 2:30 p.m. local time.

This plane, a Boeing 747-4J6, usually carries high-level Chinese officials. Kim was speculated to be flying in it rather than his own antiquated Soviet-era private jet.

Kim’s private jet, the Chammae-1, is an Ilyushin IL-62M jet North Korea bought from the Soviet Union in 1982.
The website also tracked an Air Koryo IL-62 flying south through China a little before noon.

A third cargo plane from North Korea was reported to have arrived earlier on Sunday in Singapore.
Kim is expected to stay at The St. Regis hotel.

Trump departed from the two-day Group of Seven summit in Quebec early to head to Singapore straight from Canada, where the leaders of the G-7 industrialized nations were gathered.

He is scheduled to arrive at Singapore’s Paya Lebar Airbase at 8:35 p.m. on Sunday, according to the White House. He is expected to head to the Shangri-La Hotel, where the U.S. delegation will be staying during the summit.

Both the Shangri-La and St. Regis are located in a special event area designated by the Singaporean government last week, which will last until after the summit ends. Another special event area was designated around the Capella Hotel on Sentosa Island, off the southern coast of Singapore, where the June 12 North-U.S. summit is scheduled to be held.

The U.S. delegation aboard Air Force One with Trump includes Secretary of State Mike Pompeo and John Bolton, Trump’s national security adviser. He was also accompanied by his chief of staff, John Kelly, and Sarah Huckabee Sanders, the White House press secretary.
Trump said in a press conference Saturday before departing the G-7 summit in Canada that he will be heading “on a mission of peace” in Singapore.

“In my heart, we’re going to be carrying the hearts of millions of people, people from all over the world,” said Trump. “We have to get denuclearization. We have to get something going. We really think that North Korea will be a tremendous place in a very short period of time.”

He said that he appreciates “working together with North Korea” and that the North Koreans are “working very well with us,” signaling optimism as he headed into his summit with Kim Jong-un.

Trump acknowledged that he was venturing into “unknown territory, in the truest sense,” but that he felt “confident” that Kim “wants to do something great for his people.”

But Trump warned that such an opportunity is “never going to be there again” and is one that “few people have ever had.” While calling this a “one-time shot,” Trump added he thinks it’s “going to work out very well.”

Trump said he has a “clear objective” as he heads into his summit with Kim and is preparing for the summit with a “very positive spirit,” adding, “I think we’re going to come out fine.”

He acknowledged the chance that the talks “may not work out,” but said, “There’s probably an even better chance that it will take a period of time” and would “be a process.”

His remarks indicated that all the details of getting North Korea to agree to a denuclearization process may not have been ironed out in preliminary talks before the summit.

On what kind of outcome he would expect from the initial talks, Trump said that “the minimum would be relationship. You’d start at least a dialogue.”

Trump pointed out that he is a dealmaker, saying, “Now, I’d like to accomplish more than that. But at a minimum, I do believe, at least we’ll have met each other…Hopefully we will have liked each other and we’ll start that process.”
Trump added that he will know “within the first minute” if Kim is serious about denuclearization.

“They say that you know if you’re going to like somebody in the first five seconds,” Trump said, adding that if he thinks “it won’t happen,” he’s not “going to waste my time,” nor Kim’s time.

When asked if he will speak on the human rights situation in the North during the summit, Trump said that “every issue is going to be raised” in his talks with Kim.

“That’s why I feel positive, because it makes so much sense,” said Trump. “And we will watch over, and we’ll protect.”
He said that South Korea, Japan and China “want to see it happen, and they’ll help.”

“This is a great time,” said Trump. “This has not happened in all of the years that they’ve been separated by a very artificial boundary. This is a great opportunity for peace, and lasting peace and prosperity.”