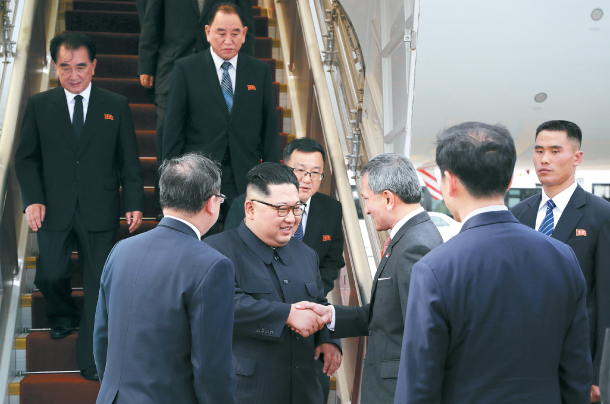 North Korean leader Kim Jong-un and U.S. President Donald Trump both arrived in Singapore on Sunday, setting the stage for their historic summit in the Southeast Asian nation on Tuesday.

The leaders were each scheduled to meet separately with Singaporean Prime Minister Lee Hsien Loong, according to Singapore’s Ministry of Foreign Affairs in a statement released on Sunday. Kim met with Lee on Sunday evening. Trump’s meeting was scheduled for Monday.

The two leaders were expected to spend most of their remaining time preparing for the summit, intended to get North Korea to commit to a denuclearization process in exchange for certain security guarantees for the Kim regime.

Kim arrived at Singapore Changi Airport on an Air China jet from Pyongyang after a seven-hour flight a little past 2:30 p.m. local time.

He was greeted at the airport by Singapore’s Foreign Minister Vivian Balakrishnan, who made a two-day trip to Pyongyang over Thursday and Friday to discuss logistics for the upcoming summit with his North Korean counterpart, Ri Yong-ho.

Kim’s flight to Singapore was a covert operation, as three planes from Pyongyang were dispatched to Singapore early Sunday at different times, likely to enable the North Korean leader to travel discreetly and bolster his security. This is the furthest Kim has traveled since he assumed power after his father Kim Jong-il’s death in late 2011. A black limousine observed to be carrying Kim, accompanied by a motorcade, headed from the airport straight to the St. Regis hotel, where the North Korean delegation is expected to stay during the summit. Kim was not spotted entering the hotel.

This plane, a Boeing 747-4J6, usually carries high-level Chinese officials. Kim was speculated to be flying in it rather than his own antiquated Soviet-era private jet. Kim’s private aircraft, the Chammae-1, is an Ilyushin IL-62M jet North Korea bought from the Soviet Union in 1982. Because of this plane’s age, there were concerns over whether it would be able to safely fly the 4,700 kilometers (2,920 miles) from Pyongyang to Singapore.

A Russian-made cargo plane from North Korea, believed to be carrying supplies such as food, vehicles and authorized weapons, was also reported to have arrived earlier that day in Singapore.

The Straits Times, a Singapore daily, reported that the North Korean delegation is expected to comprise more than 100 officials, including Kim’s bodyguards. An advance entourage of North Korean officials arrived in Singapore via an Air China passenger flight Saturday afternoon. 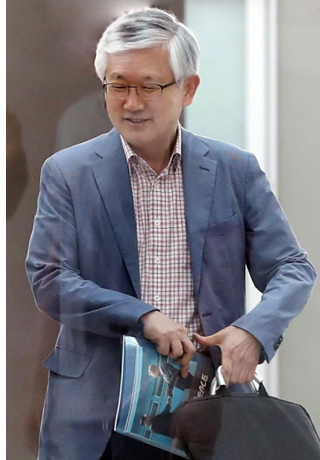 A woman in black, wearing sunglasses, believed to be Hyon Song-wol, the leader of North Korea’s Samjiyon Orchestra, who has been at the forefront of recent inter-Korean cultural exchanges, was also spotted with the North’s entourage along with the leader’s younger sister Kim Yo-jong.

The St. Regis hotel is located minutes away by car from the Shangri-La Hotel, where Trump and his entourage will reside during the summit. Both the Shangri-La and the St. Regis are located in a special event area designated by the Singaporean government last week, which took effect Sunday and will last until Thursday.

Another special event area was designated around the Capella Hotel on Sentosa Island, off the southern coast of Singapore, where the June 12 North-U.S. summit is scheduled to be held. Public access to these high-security areas will be strictly limited during the summit.

Trump departed in the middle of the two-day Group of Seven summit in Quebec to head to Singapore straight from Canada, where the leaders of the G-7 industrialized nations were gathered for talks on trade, tariff barriers, security and the environment.

Trump was scheduled to arrive at Singapore’s Paya Lebar Air Base at 8:35 p.m. on Sunday, according to the White House.

The U.S. delegation aboard Air Force One with Trump includes Secretary of State Mike Pompeo, who has visited Pyongyang twice, and John Bolton, Trump’s hard-liner national security adviser who has been a proponent of the Libya denuclearization model for the North. The president was also accompanied by his chief of staff, John Kelly, and Sarah Huckabee Sanders, the White House press secretary.

Trump said in a press conference Saturday before departing the G-7 summit in Canada that he will be heading “on a mission of peace” in Singapore.

“In my heart, we’re going to be carrying the hearts of millions of people, people from all over the world,” said Trump. “We have to get denuclearization. We have to get something going. We really think that North Korea will be a tremendous place in a very short period of time.”

He said that he appreciates “working together with North Korea” and that the North Koreans are “working very well with us,” signaling optimism as he headed into his summit with Kim Jong-un.

Trump acknowledged that he was venturing into “unknown territory, in the truest sense,” but that he felt “confident” that Kim “wants to do something great for his people.”

But Trump warned that such an opportunity is “never going to be there again” and is one that “few people have ever had.” While he called the summit a “one-time shot,” Trump added he thinks it’s “going to work out very well.” Trump said he has a “clear objective” as he heads into his summit with Kim and is preparing for the summit with a “very positive spirit,” adding, “I think we’re going to come out fine.”

He acknowledged the chance that the talks “may not work out,” but said, “There’s probably an even better chance that it will take a period of time” and would “be a process.”

His remarks indicated that all the details of getting North Korea to agree to a denuclearization process may not have been ironed out in preliminary talks before the summit, but he has also indicated there could be follow-up meetings.

On what kind of outcome he would expect from the initial talks, Trump said that “the minimum would be relationship. You’d start at least a dialogue.”

Trump, emphasizing that he is a dealmaker, said, “Now, I’d like to accomplish more than that. But at a minimum, I do believe, at least we’ll have met each other… Hopefully we will have liked each other and we’ll start that process.”

But Trump added that he will know “within the first minute” if Kim is serious about denuclearization.

“They say that you know if you’re going to like somebody in the first five seconds,” Trump said. If the president thinks “it won’t happen,” he said he’s not “going to waste” both their time.

When asked if he will speak on the human rights situation in the North during the summit, Trump said that “every issue is going to be raised” in his talks with Kim.

Trump said that he feels “positive” about the summit “because it makes so much sense,” and that South Korea, Japan and China “want to see it happen, and they’ll help.”

He pledged, “We will watch over, and we’ll protect.”

“This is a great time,” said Trump. “This has not happened in all of the years that they’ve been separated by a very artificial boundary. This is a great opportunity for peace, and lasting peace and prosperity.”

While Trump faced off with the leaders of the Western world, including Germany, France and the United Kingdom at the G-7 meeting, ahead of the summit, Kim was spotted leisurely touring a new seafood restaurant in Pyongyang, accompanied by his wife, Ri Sol-ju, on Saturday.

South Korea’s Blue House also sent a support team to Singapore Sunday in advance of the summit to respond to the situation. Nam Gwan-pyo, a deputy director of South Korea’s National Security Office, told reporters at Incheon International Airport before departing, “We look forward to the historic North-U.S. leaders’ summit being held successfully. I believe our president and many people have put their concerted effort for this stage to take place.” Nam added, “Our main task is to maintain a system where we can respond immediately to any situation that unfolds on location and support the activities of our press.” Some 3,000 reporters from around the world are traveling to Singapore to cover the event.

Despite speculations over the possibility that South Korean President Moon Jae-in may be able to travel last-minute to Singapore for a follow-up trilateral summit after the Trump-Kim talks, a Blue House official downplayed the possibility to reporters in Seoul on Sunday, saying that it was “unlikely.”

Anticipation was growing that a formal end to the 1950-53 Korean War may be declared through a trilateral summit in Singapore involving South Korea should the North-U.S. talks go well. Trump has indicated he would like an official peace treaty to end the war, which would replace the 1953 armistice agreement.

Moon will keep his schedule relatively free through Wednesday so he can closely monitor the summit.