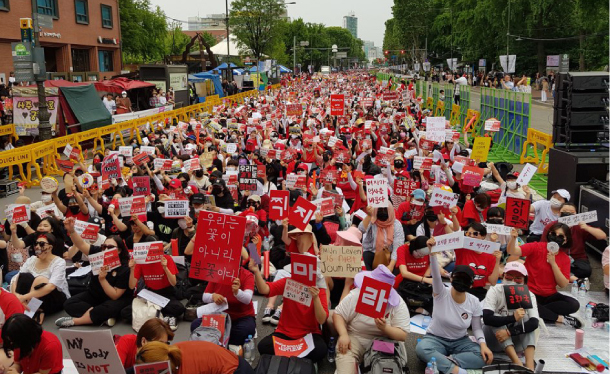 Around 15,000 women filled the streets near Hyehwa Station in Jongno District, central Seoul, on Saturday to demand fairer police investigations into spy camera crimes. This was the second rally organized by the group Inconvenient Courage on internet portal Daum, after their first one on May 19.

The protesters’ anger was originally sparked by the police’s prompt arrest last month of a woman who posted a picture of a nude male life model online.

Korean police have long been accused of lax enforcement against male perpetrators of spy camera crimes. Many feminist groups saw their quick response to a case with a female perpetrator as an example of sexism. On the week of May 11, a petition to the Blue House protesting sexist investigations was signed by more than 400,000 people. The rally on Saturday was the latest development in the ongoing movement against bias in police investigations.

The organizers of the rally said Saturday that they will “continue to unleash [their] rage until [they] are rightfully protected” and that “male safety is being prioritized over human safety.” They also demanded that the male police commissioner step down, that 90 percent of new police recruits be women and called for the arrest of people who take, upload or watch videos made with spy cameras.

Protesters yelled out slogans including “inconvenient courage changes the world” and “it’s not that they couldn’t, they didn’t [referring to police efforts to catch male perpetrators].” Some of the protesters also used online slang such as “hannamchung” (a pejorative term that likens Korean men to pests), “jairu” (“hey there, sister”) and “pull a Jae-gi” (mocking the suicide of men’s rights activist Seong Jae-gi).

At the rally, some protesters dressed in red and shaved off their hair to “show that [they] will never back down” and that they are “people before [they are] women.” A protester who had her hair shaved said that she hopes “women will be liberated from societal pressure to look a certain way.”

Protesters also performed a short play in which a male character relieved himself in a bathroom stall marked “safe bathroom for men,” while others took pictures and leaked them online. In the “mirroring” performance, the male character repeatedly yelled out, “Please stop taking pictures! Please don’t leak those online!” before meeting his untimely death. The play was meant to highlight the dangers of spy camera crimes.

Although the rally itself was in response to perceived sexism in police investigations, many protesters focused on the daily threats they face from spy cameras.

“I am frustrated that my daughter still faces the same problems that my generation faced,” a mother said. Her daughter said that she “experiences so much fear that [she] wouldn’t have to encounter as a man.” Two sisters from Guri, Gyeonggi, who attended the protest, said they “hope to banish sexism at large from society, not just spy camera crimes.”

The rally had male supporters as well, although participation in the rally was limited to “biological women.” A boy, 14, who yelled out slogans from the sideline of the rally, said that “it’s too easy to find videos from spy cameras online” and that he doesn’t want “[his] younger sister to be the victim of those crimes.”