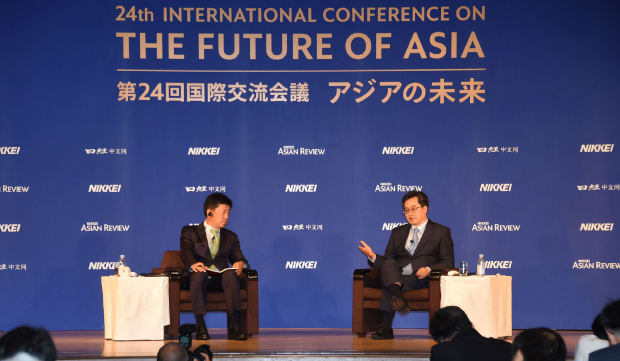 Korean Finance Minister Kim Dong-yeon speaks during an international forum organized by the Japanese newspaper Nihon Keizai Shimbun at a hotel in Tokyo on Monday. [MINISTRY OF STRATEGY AND FINANCE]

“The best scenario is for North Korea to open up to the international community as fast as possible,” said the finance minister at an international forum held in Tokyo on Monday. The forum was hosted by the Japanese newspaper Nihon Keizai Shimbun.

Kim said if conversations with North Korea go well, international organizations, including the International Monetary Fund, the Asia Development Bank and World Bank could help the country on the humanitarian front. Kim cited the Iraqi development fund as a good example.

“I expect the Japanese government will actively participate [in the fund], although it would have to proceed with the approval of international society,” Kim said.

Kim said that the South Korean government is evaluating every possibility, including a negative end outcome of the summit.

“Although it is unofficial, we have been closely been working with international society,” Kim said. “If the summit goes in a good direction, it will not only open up new opportunities politically and diplomatically, but also economically.”

The finance minister also discussed the domestic economy and said that under the Moon Jae-in government, Korea is trying to build a more inclusive economy.

“Korea has undergone rapid growth from a country whose GDP per capita was less than $100 to $30,000 in 2017,” Kim said. “Korea has undergone numerous innovations, but it lacked inclusiveness, and as a result this has created problems in income distribution and polarization.”

Kim said that he was confident that Korea would overcome these problems through the government’s inclusive economy campaign.