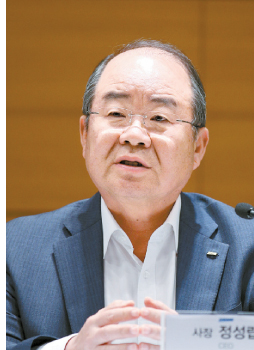 CEO Jung Sung-leep of Daewoo Shipbuilding and Marine Engineering (DSME) said the company has already passed 60 percent of this year’s sales target and is on track with its turnaround plan during a press briefing held Monday at its Seoul office.

Monday’s briefing is the first that Jung has held since he was re-elected as CEO of the troubled shipbuilder though a shareholders’ meeting last month. The appointment made him a fourth-term CEO for the company.

“Until now, we have confirmed orders worth roughly $4.4 billion, which is about 60 percent of our sales target for the year,” Jung said. “By the end of this year, I am confident the company will be able to reach or even surpass the target of $7.3 billion in orders.”

According to Jung, most orders were for commercial ships until last month. The company is now also expecting at least about $1 billion worth of orders for special-purpose ships from the domestic market.

As for high-priced offshore plants, no order has been inked so far this year but the shipbuilder will try to ink orders in the latter half of the year. Jung said the offshore plant market is the most uncertain market in the shipbuilding industry right now.

Even though international oil prices are on the rise, it takes roughly two years for the good oil market to result in actual orders for offshore plants, according to Jung.

Still, Jung said the shipbuilder already has enough orders secured in its shipyard for years to come.

“Our [Okpo] shipyard has the largest order backlog in the world and we have enough orders to run the shipyard in full until next year,” Jung said. “If we continue inking new orders through the end of this year, I think we will be able to secure a backlog that will last until the first half of 2021.”

Jung said the major contributor to its large order backlog was the Yamal LNG project it won in 2014. Fifteen ice-class tankers to lift liquefied natural gas for a Russian megaproject were ordered from DSME. LNG carriers take about three years to build, according to Jung, a year longer than other ships like very large crude carriers.

As for its six-year turnaround plan that began in 2015, the CEO said it has so far accomplished 100 percent of its annual targets, though it may seem like it has only accomplished half of its ultimate target of saving 5.9 trillion won ($5.4 billion).

As for further turnaround measures involving lay-offs, Cho Wook-sung, a senior executive vice president of DSME, said such a plan will only be finalized by the third or fourth quarter this year.

While there were originally planned layoffs, Jung said the company is currently reconsidering due to the full operation of its shipyard and lack of staff.

“My ultimate goal is to make DSME an attractive company for other companies to be interested in acquiring,” Jung said.