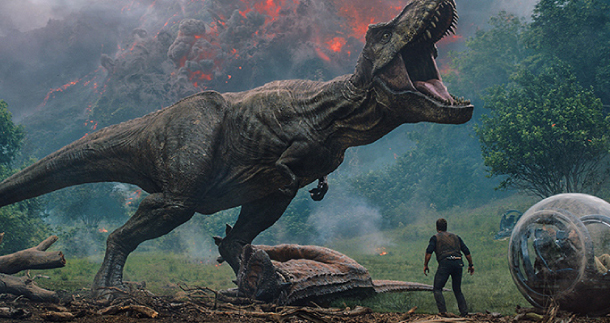 
“Jurassic World: Fallen Kingdom” conquered Korea’s weekend box office, holding onto the top spot for the five days since it opened in local theaters on Wednesday.

It was the biggest debut in Korean box office history, with opening sales of an impressive 1.18 million tickets. From Friday to Sunday, the sci-fi action-adventure release sold 1.8 million tickets and was shown on 1,972 screens, accounting for more than 70 percent of weekend ticket sales. As of Sunday, the movie had sold a total of 3.22 million tickets, and had box office revenues of 28.6 billion won ($25.6 million).

The film’s popularity was partly boosted by Memorial Day - a national holiday - on June 6, and director Juan Antonio Bayona’s (“A Monster Calls”) surprise visit to Korea on Thursday.

But the film is also generating headlines as the local distributor UPI Korea intentionally cut some violent scenes from the original to lower its rating, a crucial determinant for a film’s box office success.

Lasting about 40 seconds, the cut scenes include the depiction of Indoraptor tearing off a character’s arm and devouring it. The movie is rated 12 and above in Korea while it is rated PG-13 in the United States, where it will open on June 22.

A sequel to the 2015’s “Jurassic World,” the Universal Pictures release is the fifth film in the Jurassic Park series. Starring Chris Pratt as a charismatic dinosaur trainer and Bryce Dallas Howard as the former operations manager at Jurassic World-turned-dinosaur rights activist, the film is set in the volcanic, dinosaur-inhabited island of Isla Nublar, which is about to erupt. It depicts the two protagonists’ journey to save the dinosaurs from extinction on the deserted island.

Far behind in the weekend box office was local crime action flick “Believer.”

The movie, about the search for a ring leader behind a mysterious drug organization, sold 401,000 admissions and showed on 753 screens, taking 15.9 percent of weekend ticket sales. The best-performing local release of the year to date, “Believer” has sold more than 4.5 million tickets.

The supernatural horror film “Hereditary” opened at third place on its debut weekend and the Amy Schumer comedy, “I Feel Pretty,” debuted at fourth. The box office is expected to be dented on the coming weekend by the start of the 2018 FIFA World Cup in Russia on Thursday.