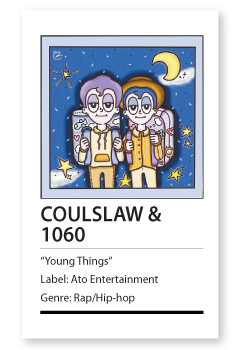 The album’s cover, filled with neon purple and shining stars, is innocuous enough. However, the seven-track album isn’t innocuous by any means. Much like the cover, the New-Age whispers of contributing vocalist Lee Ro-un strike a contrast with the rappers’ snarky verses.

Artists from the hip-hop crews MightyFine, Coulslaw and 1060 have collaborated since 2015, even though this is their first co-produced album. Their record label said that their “constant exchange of ideas” allowed them to create an album in just two months. In lead single “Young Things,” Coulslaw sighs into the microphone. He’s behind. He’s motivated. He’s salty.

“I am young and have so much to do. [I] shouldn’t think, just move.” Both artists have been in the hip-hop scene since 2010. Their verses are filled with a poetic desperation, and when their flow can start to seem a little repetitive, they deftly compensate for it with a powerful verbal swing.

To be young has never been more exhausting, and we need someone to spell that out for us.