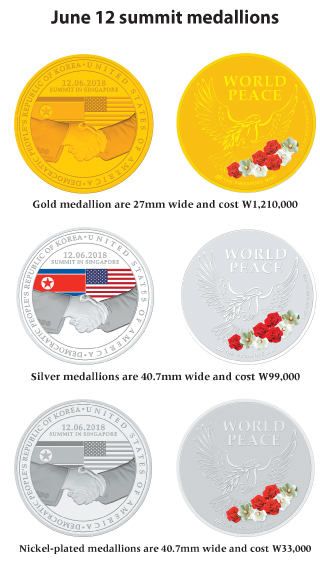 Limited-edition North Korea–U.S. summit commemorative medallions will be produced by The Singapore Mint in honor of the country’s role as host for today’s summit.

According to the mint, the medallion “will mark the historical summit for world peace, celebrate its duty as host and duty as gate way to economy and security, connecting East and West.”

The front of the medallion features the two countries’ flags in the background with an illustration of the two leaders shaking hands in relief in the foreground. Above the image, the date of the summit, the host country and the official English names of the United States and North Korea are arranged around the edge.

A peace dove is featured on the reverse above the national flowers of the United States and North Korea — the rose and magnolia. Above the image are the words “World Peace,” the main message of the summit.

Poongsan Hwadong will be responsible for selling the medallions in Korea and other countries outside Singapore. The price is 1,210,000 won ($1,125) for the gold medallion, 99,000 won for silver and 33,000 for nickel-plated medallions.

The medallion will be unveiled in Korea on June 25, and purchases can be made through banks and post offices, as well as directly through Poongsan Hwadong.