At summit, even protocol is a trump card

At summit, even protocol is a trump card 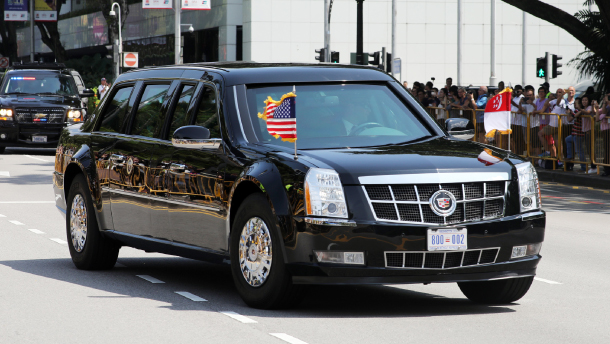 In a summit preceded by tug-of-war posturing between the United States and North Korea, even minute security details have become fodder for diplomatic grandstanding.

The tight security measures for North Korean leader Kim Jong-un in Singapore show the lengths that the North will go to ensure its leader does not appear inferior to U.S. President Donald Trump in front of international cameras, South Korean experts say. Kim will try to enter the summit - a North Korean leader’s first with an American president - on an equal or higher ground.

The first indication of such protocol was the plane on which Kim chose to fly to Singapore. The North Korean leader rode a Boeing 747-400 borrowed from China’s state-owned carrier, Air China, instead of his private plane refurbished from a Soviet jet purchased in 1982. The likely reason was fear that the plane might not make it to Singapore safely. Kim has only made three known trips to a foreign country since assuming power in December 2011 - two to China and one to South Korea. Only one was made by plane.

Kim landed at Singapore’s Changi Airport a little past 2:30 p.m. on Sunday. U.S. President Donald Trump landed at Paya Lebar Air Base shortly before 8:30 p.m. His plane, Air Force One, is a customized Boeing 747-200B equipped with protected telecommunication systems and rigid defense capabilities shrouded in secrecy.

The plane that Kim rode on can accommodate 416 people, higher than Air Force One’s 366. Kim’s jet model is also newer, first made in 1988, 18 years after Air Force One.

“North Korea is trying to seize the upper hand in its psychological warfare against the United States,” said Jeong Yong-tae, head of the Seoul-based Institute of North Korean Studies. The fact that North Korean state media did not shy away from reporting that it borrowed a plane from China for the summit indicates the move is a propaganda stunt to boast about Kim’s restored relations with Beijing, Jeong continued.

When Kim left the St. Regis hotel on Sunday afternoon for a meeting with Singaporean Prime Minister Lee Hsien Loong at the presidential palace, an entourage of suited bodyguards jogged alongside his car, replicating a scene that drew worldwide attention on April 27 when he rode in similar fashion during his summit with South Korean President Moon Jae-in.

The bodyguards are part of the North Korean Army’s Unit 974, which comprises about 3,000 soldiers whose chief role is to protect Kim wherever he goes. Trump’s security detail is the Secret Service, a federal law enforcement agency under the Department of Homeland Security.

Kim brought his own Mercedes-Benz armored limousine to Singapore, ditching diplomatic protocol that the country receiving a foreign head of state usually provides the vehicles that his or her delegation will use throughout the stay. South Korean intelligence officials believe that the North procured the luxury vehicle by smuggling it through China in 2013 to evade international sanctions.

Trump will be riding in the official state car of the president of the United States, a secured Cadillac variably nicknamed “The Beast” and “Cadillac One,” a riff on Air Force One.

It remains unknown whether Kim arrived in Singapore with a briefcase that can be used to authorize a nuclear strike similar to the United States’ “nuclear football.” The North has never revealed whether it has any object of such sort, but Kim did mention having a “nuclear button” on his desk during his New Year’s address this January.