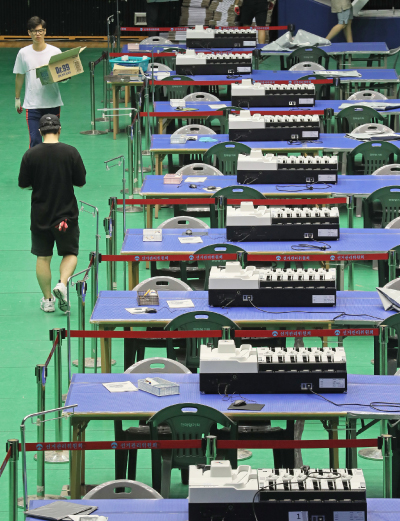 Officials from the National Election Commission set up electronic ballot sorting machines in a gymnasium in Jeju Island on Monday, two days before the June 13 local elections. [YONHAP]

Complaints are pouring in about candidates running in the upcoming local elections on June 13 sending out too many text messages to voters.

A 38-year-old Jongno District resident told the JoongAng Ilbo that his phone has been inundated with messages from candidates running in Seongnam and Bucheon in Gyeonggi - far from his own voting district.

He’s angry that the candidates got his contact information - and suspects the campaigns may have bought the information through illegal channels.

As the June 13 local elections rapidly approach, such complaints are abound coming from cellphone owners nationwide.

The Center for Cyber Difficulties, a complaint-receiving center run by the Korea Internet & Security Agency (KISA), received 11,626 complaints about unwanted election messages from June 1 to 8.

Out of these, 32.9 percent (3,820 cases) related to questions about how their contact information was obtained, while 27.1 percent (3,150 cases) said that they had continued to receive such messages even after unsubscribing from the call list.

Hwang Seong-won, head of the Center for Cyber Difficulties, recommends that phone owners “actively ask campaign offices where they are getting users’ contact information if they receive messages or calls advertising local candidates.”

It is illegal for an election campaign office to not answer such a query. It is also illegal if it continues to send such messages after the owner of a phone has unsubscribed from the call list.

Clauses 20 and 37 of the Personal Information Protection Act, enacted in October 2017, mandates that political campaign offices immediately release their phone number-collecting sources upon request, and halt sending further messages if asked by a receiver.

By the end of May, over 170 cases of violation of the Personal Information Protection Act had been reported to KISA in this election cycle, with more to be expected.

According to KISA, the Center for Cyber Difficulties received over 350 complaints per hour on the day before and the first day of early voting on June 7 and 8, indicating how pervasive this practice has become.

Any person experiencing annoyances from election-related messages or phone calls may dial 118 to consult the Center for Cyber Difficulties during working hours or file a complaint at its homepage at privacy.ksia.or.kr.