In the skies with Korea’s air ambulances

In the skies with Korea’s air ambulances 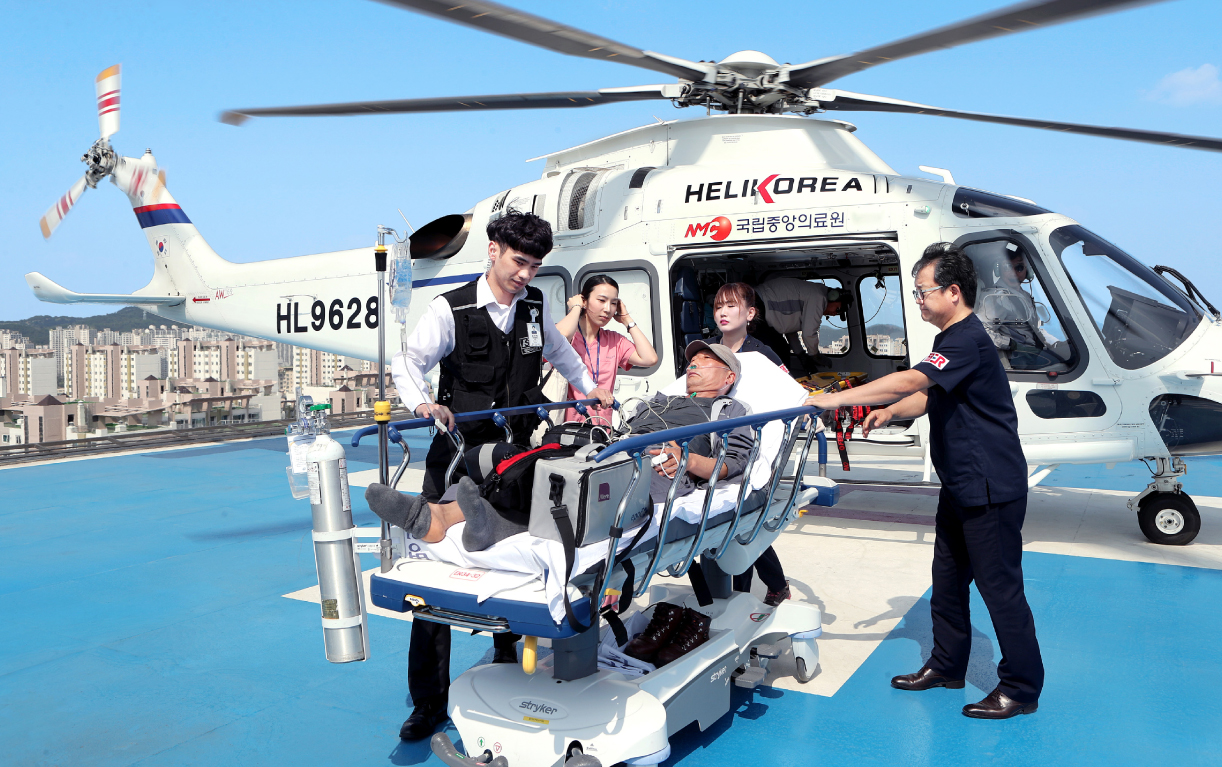 When a person suffers a serious head injury or heart attack, every second counts. Immediate care is critical to a patient’s survival in the 60 minutes after an injury, the so-called golden hour espoused by surgeon R Adams Cowley, a pioneer in the field of trauma medicine. In most cases, that means quick transport is necessary - and in some cases, that transport comes in the form of a helicopter.

Korea first introduced air ambulances - known locally as “Dr. Helicopter” - in 2011. The country was the last in the Organization for Economic Cooperation and Development to adopt them (the United States started using them in 1972, and Japanese hospitals started their “Dr. Heli” service in 2001).

Nonetheless, Korea’s Dr. Helicopter boasts a remarkable track record: six choppers have flown over 6,500 times over the past seven years, carrying a total of 6,150 patients. This reporter spent a day aboard one of the flying ambulances on May 31.

8:40 a.m.: I step into the Dr. Helicopter flight control room on the first floor of Gil Medical Center in Incheon. I meet with Yang Hyeok-jun, head of the hospital’s emergency center; Kim Hyeong-ju, the Dr. Helicopter coordinator; Kim Hye-hyeon, an air traffic controller; and Kim Hyo-seon, a nurse, who have all already been working for four hours. Kim Hye-hyeon says that they are “on call as soon as the sun rises.”

12 p.m.: No one leaves for lunch. Rather, food is delivered to us. “Every second counts,” says Kim Hyeong-ju, who’s in charge of managing patient records and relaying dispatches, “so we cannot afford to eat out.”

2:21 p.m.: The phone rings. “A patient needs emergency help in Seosan,” the person on the other line screams. “Please come ASAP!” Seosan is a city in South Chungcheong and about 80 kilometers (50 miles) away from Incheon. The call is for a man in his 60s who inhaled toxic gas while working. The air medical team’s beacon lights start blaring. Yang, who has been on more than 200 Dr. Helicopter rides, calls for a prompt dispatch. He fears the man might sustain serious brain injuries if the team doesn’t make it to Seosan in time. A Dr. Helicopter on standby at a nearby military base takes off.

2:22 p.m.: Yang and Kim Hyo-seon, the nurse, pack a defibrillator and emergency kit. I follow them to the helipad on the 21st floor. The helicopter is approaching us. I had been on a military chopper three decades ago, but I was still nervous. The copilot helped me put on my X-shaped seat belt. I put on headphones to block out the loud noise.

2:25 p.m.: The helicopter rises off of the ground as soon as the pilot announces takeoff. I can feel my entire body vibrating. The ride is fast and smooth. We fly over Songdo, an island in Incheon, in no time, and it feels like I’m in a medium-sized car. I notice that Dr. Helicopter is quite literally a “flying emergency room” - it is equipped with a cot, respirator, automatic chest compressor, thoracic duct cannula equipment and ultrasound monitors.

Yang explains that the helicopter also has “arteriopressors, styptics and about 30 more drugs” and that the team can “flexibly activate emergency systems based on the patient’s condition.” Dr. Helicopter can travel continuously for 870 kilometers at speeds of up to 250 kilometers per hour and has a maximum capacity of eight people. It reaches 234 kilometers per hour with minimal vibration as we fly over Seosan. Nurse Kim, who has been on the helicopter more than 50 times, says that their utmost priority is to “stabilize the patient’s cardiopulmonary functions” as soon as they arrive.

2:48 p.m.: Just 23 minutes after takeoff, we land at Seosan Sports Complex. The patient is waiting unconscious in an ambulance. The medical team promptly attaches an electrocardiogram monitor to him. They measure his oxygen levels, attach an oxygen mask and administer some drugs. They check his vitals and move him to the helicopter.

2:57 p.m.: We take off again. Yang and Kim attach an IV tube to the patient and conduct a blood and toxin test all at once. Five minutes later, as we fly over some rice paddies in Dangjin, the patient finally opens his mouth. “I’m dizzy,” he mumbles. Yang says the toxic gas is making it hard for him to breathe. I can now see the Sihwa embankment - we’re getting close to the hospital. Yang reports the patient’s condition to the flight control room and requests full preparation by the time we land.

3:21 p.m.: The helicopter is back on Gil Medical Center’s helipad. A medical team on standby moves the patient to an emergency room on the first floor. The 47-minute round trip ends here. The patient is Mr. Kim, 61, who is quickly administered more oxygen and drugs. His breathing begins to return to normal. “Thank you,” he tells the medical team. He has narrowly escaped brain damage from acute respiratory distress.

3:30 p.m.: I stop by the flight control room. The traffic controller, Kim Hye-hyeon, shows me the flight trajectory - a record of the helicopter’s speed, location and distance calculated every two minutes. “Gil Medical Center’s Dr. Helicopter covers the West Sea region from Gimpo and Geomdan,” she tells me, “and has flown 988 times, transporting a total of 961 patients.”

The helicopters at Gil Medical Center and Mokpo Hankook Hospital are medium-sized with an annual operating cost of 4 billion won ($3.7 million) each. The others are smaller and cost 3 billion won to maintain. The Ministry of Health and Welfare funds 70 percent of the cost, while the other 30 percent is provided by municipal governments. The hospitals only need to provide the medical teams. Each team comprises 18 people including specialists, nurses and paramedics. The helicopter service is run by 10 people including the pilot, mechanics and air traffic controllers.

In 2011, Dr. Helicopter started by transporting 76 patients, according to the National Medical Center, the national health care authority. By May this year, the accumulated figure has reached 6,150. Among the patients, 1,667 were from North Gyeongsang, 1,441 from South Jeolla and 1,045 from Gangwon. Most of them suffered brain or cardiovascular injuries or were victims of major trauma. The center estimates over 90 percent of transported patients have survived.

However, there is still a long way to go. The helicopters cannot be used in inclement weather or after sunset. There are also not enough helicopters. The United States has over 1000 and Japan more than 50.

The mortality rate for trauma patients is also troubling at 30.5 percent, more than double the 10 to 15 percent rate in the United States and Japan. The Ministry of Health and Welfare aims to decrease Korea’s rate to 20 percent by 2025 by making trauma maps based on regional road systems and permitting some nighttime flights.

Yang says there needs to be “way more than six helicopters and 500 transfer points” and the system should be integrated with 40 regional emergency medical centers and 17 trauma centers in the country in order to reach every corner in time.