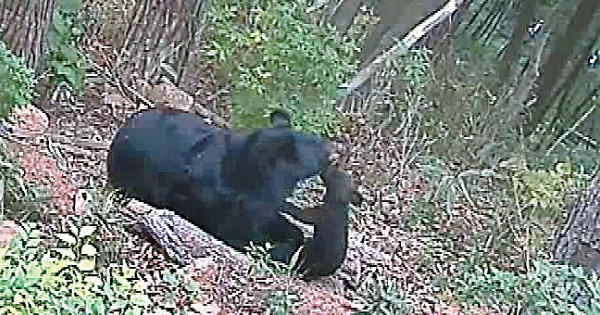 An Asiatic black bear cub born through artificial insemination plays with its mother. The Korea National Park Service plans to release it into the wild this fall. [KOREA NATIONAL PARK SERVICE]

An Asiatic black bear has given birth through artificial insemination for the first time in the world, Korea’s park service announced on Sunday, marking a milestone in efforts to save the endangered species.

The National Park Service’s Species Restoration Technology Institute performed DNA tests on two cubs born on a breeding ground in Gurye County, South Jeolla, in February and confirmed they were the results of artificial insemination.

A natural breeding program has been operating on the foot of Mount Jiri since 2004, but when scientists noticed only the strongest bears were mating, they began researching artificial insemination in 2015.

In July 2017, scientists artificially inseminated four bears on the breeding ground. Two of them each gave birth to a cub this February, but one of them died for unknown reasons while being reared by its mother.

The two Asiatic black bear births are the first in the world through artificial insemination, according to the park service, and it was a challenge. Scientists said they struggled to find the right window of time to inseminate the bears.

“Asiatic black bears are especially hard to artificially inseminate because they have a unique breeding mechanism in which the womb only accepts the fertilized embryo when certain physiological and environmental requirements are fulfilled,” said Jeong Dong-hyuk, head of park service’s Wild Animal Medical Center. “When the body wouldn’t accept the fertilized embryo, [the scientists] tried changing the female bears’ diet to make them lose weight.”

It is also difficult to breed bears in general because they give birth during hibernation. If a pregnant bear does not consume enough nutrients, she could suffer a miscarriage.

Other bear species have had low success rates for artificial insemination. For the giant panda, the rate is 25 percent. In the United States, the Cincinnati Zoo is trying to artificially inseminate polar bears, and the Smithsonian is working on the sun bear. Neither institution has seen substantial results.

Korean scientists plan to move the single surviving cub from the artificial insemination project to a training ground in August or September with the hope of letting it loose in the wild come fall.

“We will work further to improve the genetic diversity of the restored Asiatic black bear population,” said Song Dong-ju, head of the Species Restoration Technology Institute.