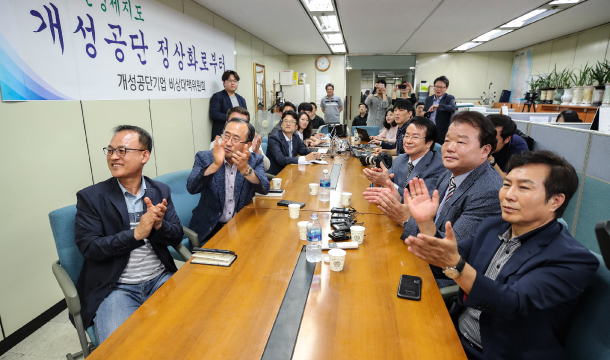 As the historic meeting between U.S. President Donald Trump and North Korean leader Kim Jong-un drew to a close in Singapore, all eyes were on what steps the isolated country would take, including possibly opening up its market and adopting a new economic model.

“North Korea and the United States will agree on specific steps toward ending the hostile relations that have been going on for around 70 years,” Kim Il-gu, managing director and head of Hanwha Investment & Securities’ research center, said in a report released Tuesday, adding that, after the summit, North Korea will take the opportunity to advance onto the global stage and start taking steps toward opening its market.

“Historically, Singapore has been a geographical key point in traveling between Asia and Europe,” Kim said. “Kim Jong-un, after meeting with President Trump face-to-face, will try to secure a route to Europe.”

The research center head speculates that North Korea will most likely follow the Chinese model over that of Eastern Europe and that of Vietnam.

“Eastern Europe’s capitalism progressed with the collapse of the communist party while Vietnam became part of the international division of labor, which is the result of globalization, with the help of the United States,” Kim said. “China, however, has maintained its political system and minimized social changes in the process of reforming and opening [its market].”

There has also been speculation that Kim Jong-un has expressed interest in Singapore’s economic model.

The young North Korean leader has long been interested in the economy. Even while building his nuclear arsenal, Kim also focused on prioritizing the economy, including the massive overhaul of the Pyongyang skyline and adopting Western-style amusement parks and restaurants and rejuvenating its airports.

His interest was evident on the night before the summit, when he unexpectedly took a midnight tour around Singapore including the Marina Bay Sands Hotel, which also has a casino. The hotel was built by South Korean construction company Ssangyong E&C.

According to the Korean Central News Agency (KCNA), the North Korean state media outlet, Kim said he plans to learn a lot from Singapore’s experience in various areas.

North Korea’s exports have also been increasing around 4 to 5 percent, while imports have been enjoying similar growth, between 3 and 5 percent.

However, North Korea’s economy has traditionally been heavily dependent on the Chinese economy. Between 2015 and 2017, 90 percent of North Korean goods were exported to China.

But international sanctions led by the Trump administration - particularly focused on China - have been taking its toll, reportedly putting pressure on Kim.

On Tuesday, expectations were high on the possibility that the Kaesong Industrial Complex could reopen as a result of the Singapore summit.

“The economic cooperation between North and South Korea should be the first thing that happens,” said Shin Han-yong, chairman of the Corporate Association of the Kaesong Industrial Complex. “We were half skeptical in between the North-South Korea summit and the North Korea-U.S. summit, but as all of these happened so quickly, we hope that economic cooperation will also happen at a rapid pace.”