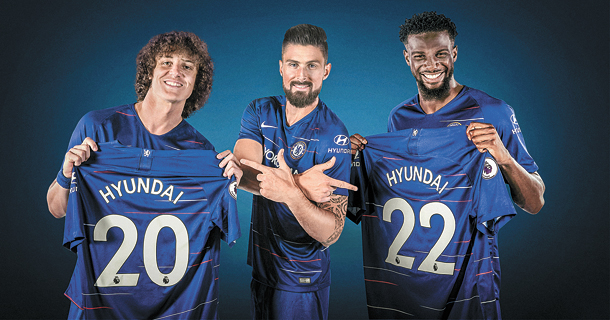 Korea’s biggest automaker announced that it will sponsor the football team until 2022.

Hyundai Motor’s logo will appear on the sleeves of the team’s new uniform and on the signboards at Chelsea’s home and away games. The automaker will also display its cars at Chelsea’s Stamford Bridge stadium.

This is the first time Hyundai Motor has sponsored a British football team.

“For 20 years, Hyundai has been bringing the dynamism, passion and excitement of football to fans around the world,” said Andreas-Christoph Hofmann, vice president of marketing product at Hyundai Motor. “We are thrilled to begin a new partnership with Chelsea, a successful and ambitious club that matches the global scale and challenging spirit of Hyundai.”

Chelsea’s new uniform that features Hyundai Motor’s logo will debut on July 23, when the team will play against Perth Glory in Australia ahead of the 2018-19 Premier League season.

Chelsea was founded in 1905 and has won six EPL seasons. It has also won the FA Cup eight times.

The automotive company has been a FIFA Top Partner since 1999, and has been sponsoring the French football team Olympique Lyonnaise since 2012.

As official FIFA partners, Hyundai Motor and Kia Motors have recently stepped up their marketing effort for the upcoming Russia World Cup.