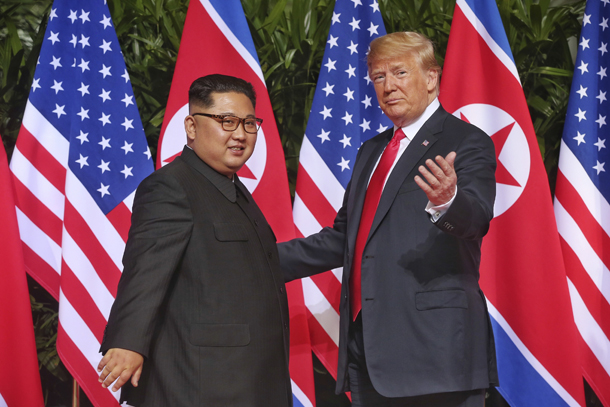 U.S. President Donald Trump and North Korean leader Kim Jong-un concluded a historic summit in Singapore on Tuesday agreeing to the “complete denuclearization” of the Korean Peninsula in a joint statement.

The two leaders kicked off what had been billed as “the summit of the century” at 9 a.m. on Tuesday at the Capella Hotel in Singapore’s southern resort island of Sentosa, and less than five hours later, Trump and Kim sat side by side and signed a joint statement as onlookers applauded.

In their joint statement, Trump committed to providing “security guarantees” to North Korea, while Kim reaffirmed his commitment to the “complete denuclearization of the Korean Peninsula.”

Washington has been demanding complete, verifiable, irreversible denuclearization, or CVID, of North Korea, and the two sides during pre-summit discussions were seen to have wrangled over that wording, which ultimately was not included in the statement.

In a press conference after the summit, Trump said he will be “stopping the war games,” referring to joint military exercises between the United States and South Korea.

“I think it’s very provocative,” he said of the joint war games, as well as “expensive” and “inappropriate” under the circumstances of negotiating a “comprehensive, complete deal” with North Korea. He called the practice of Washington flying in bombers from Guam to South Korea for such joint drills “costly.”

But Trump also said on the withdrawal of U.S. troops from the Korean Peninsula, “We’re not reducing anything.” He added that at “some point” he would like to “bring them back.”

Trump also said he hoped that the 1950-53 Korean War, which ended with an armistice agreement, “will soon end.” On the signing of a formal peace treaty to end the Korean War, Trump said it would “be great” to have both South Korea and China involved.

“The past does not have to define the future,” he said. “Yesterday’s conflict doesn’t have to be tomorrow’s war.” But he added that it is “a little bit early” for talks on establishing formal diplomatic relations with North Korea.

Trump also said that South Korean President Moon Jae-in was expected to be “very involved in the final negotiation” process, adding he has already been in touch with Seoul over the details of the summit.

On why the terms verifiable and irreversible weren’t included in the statement, Trump said, “I don’t think we can make it any clearer,” when North Korea pledged “unwavering commitment to the complete denuclearization of the Korean Peninsula.”

He indicated that he wouldn’t have signed an agreement without such an understanding, especially following extensive working-level discussions that set the foundation for the summit. On a timeline for denuclearization, Trump acknowledged that the process could take a long time “scientifically,” but that it will happen “as fast as mechanically possible.”

The joint document stated that the two leaders conducted a “comprehensive, in-depth and sincere exchange of opinions” to establish new U.S.-North Korea relations and build “a lasting and robust peace regime on the Korean Peninsula.”

The four-point document said that the sides agreed to establish new U.S.-North Korea relations “in accordance with the desire of the peoples of the two countries for peace and prosperity” and build a lasting and stable peace regime on the Korean Peninsula.

North Korea also reaffirmed the Panmunjom Declaration and “commits to work towards complete denuclearization of the Korean Peninsula,” one of the key goals stated in the agreement signed by Kim and South Korean President Moon Jae-in on April 27.

Kim and Trump also agreed to recover the remains of prisoners of war from the 1950s and those missing in action, “including the immediate repatriation of those already identified.”

Acknowledging that their summit was “an epochal event of great significance” overcoming decades of tensions and hostilities, and an “opening of a new future,” they agreed to implement the promises of the statement “expeditiously.”

The two countries will hold follow-up negotiations led by U.S. Secretary of State Mike Pompeo and a high-level North Korean official to implement the agreements from the summit and to cooperate in the development of new U.S.-North Korea relations and “for the promotion of peace, prosperity, and the security of the Korean Peninsula and of the world.”

During the signing ceremony, Trump described the statement as “a pretty comprehensive document” that he was “honored” to sign. He said he was “proud of what took place today.”

On denuclearization of the Korean Peninsula, Trump said, “We’re starting the process very quickly” and that he expected to see a “very much different situation” than in the past on the Korean Peninsula. Kim said that the two leaders had “decided to leave the past behind and sign a historic document.”

“The world will see a major change,” he said before expressing gratitude to Trump for making the meeting happen.

In an hour-long press conference, Trump called his talks with Kim “honest, direct and productive,” and said they “got to know each other very well.” He said Kim raised Pyongyang’s broken promises in the past, highlighting the trust he had built with the North Korean leader. “My whole life is about deals,” said Trump. “I’ve done great with it. I know when someone wants to deal.”

Trump said that sanctions on the North will “remain in effect” for the time being but added, “I look forward to taking them off” once Pyongyang is far enough along in the denuclearization process.

He pointed out that Kim agreed to destroy “a major missile engine testing site,” which was not mentioned in the joint statement. Kim also agreed to the repatriation of U.S. prisoners’ remains at the last minute, Trump added.

Trump said that he has yet to decide what would be the location of his next summit with Kim - whether it be Pyongyang or Washington - and added, “We’re much further along than we thought.”

Earlier that morning, around 8:00 a.m., Trump’s motorcade departed from the Shangri-La Hotel in central Singapore, where the U.S. delegation was staying, while Kim’s convoy left from the St. Regis Hotel, just a few minutes away. The Singaporean authorities designated a special event area around both hotels with high security.

Sentosa Island, known for its man-made beaches, golf courses, casino and Universal Studios theme park, has also been marked a special event area. The limited transportation options to the resort island made an ideal and secure location for the summit.

North Korean leader Kim arrived at the Capella Hotel first, a little before 9:00 a.m., accompanied by officials including his younger sister Kim Yo-jong, first vice director of the Central Committee of the North’s ruling Workers’ Party. Trump arrived a few minutes later through another entrance.

After they arrived, the two leaders greeted each other with a long handshake to begin the first talks between a sitting U.S. president and North Korean leader.

The venue was lined with U.S. and North Korean flags, seen as a powerful and positive message about the future of the two countries’ relations.

The Swiss-educated Kim greeted Trump in English with, “Nice to meet you, Mr. President,” to indicate he was capable of holding a casual conversation without an interpreter. Trump lightly placed his hand on Kim’s upper shoulder and back during their first encounter.

Before starting one-on-one talks, Trump told reporters while seated next to Kim that he expected “tremendous success” from the summit, adding, “I think we will have a terrific relationship, I have no doubt.”

His remarks elicited an immediate smile and chuckle from Kim, followed by a short nod. “It wasn’t easy for us to come here,” Kim said in Korean. “For us, there was a past that grabbed our ankles and wrong prejudices and practices that at times covered our eyes and ears. We overcame all that and we are here now.”

“That’s true,” Trump said, and gave a thumbs-up to the North Korean leader.

The first meeting, which lasted about 40 minutes, was touted as an important time for the two leaders to establish a relationship with each other.

After their one-on-one, Trump said the discussion was “very, very good,” adding that he and Kim have an “excellent relationship.” Kim told reporters that the summit was a “prelude to peace.”

As they walked down a corridor to their next meeting location, where they would be accompanied by aides, Kim remarked to Trump through an interpreter that the world might view what was unfolding as a fantastic scene “from a science-fiction movie.”

The next meeting lasted 100 minutes and included key aides. Trump was joined by Mike Pompeo, his secretary of state; John Bolton, his national security adviser; and John Kelly, his White House chief of staff.

The United States has been demanding CVID from North Korea, and in turn, the North Koreans have called for what is being referred to as the “complete, verifiable, irreversible guarantee” of regime security for Kim Jong-un.

The meeting ended a little before noon and was followed by a working lunch, with more officials joining around a long banquet table decorated with white bouquets in a sunlit room.

On the U.S. side was Sung Kim, the ambassador to the Philippines and former negotiator in denuclearization talks with the North; Matthew Pottinger, the deputy assistant to the president on Asian affairs; and Sarah Huckabee Sanders, the White House press secretary. North Korean officials included No Kwang-chol, the defense minister; Choe Son-hui, the vice foreign minister; and Kim Yo-jong.

After the hour-long lunch, the two leaders took a brief stroll on the hotel grounds unaccompanied by aides. Their interpreters were nearby, but Kim and Trump appeared to be chatting freely by themselves. Trump then walked Kim over to his vehicle, a bulletproof Cadillac, and showed him the interior.

“We’ll meet again,” Trump said after the signing ceremony with Kim. “We’ll meet many times.” The remarks served as a hint of more summits to come.

After a signing ceremony inside, the two leaders returned to the red carpet where they first met, and were photographed holding their own copies of the signed document.

Trump was full of praise for Kim, calling him “worthy” and a “very smart negotiator” and a “talented man” who “loves his country very much.” Soon after, the two leaders parted ways, some five hours after arriving on Sentosa, concluding the first North-U.S. summit.