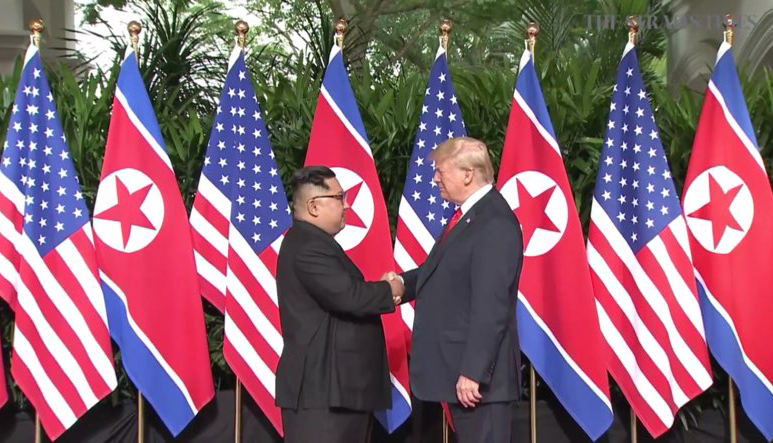 U.S. President Donald Trump and North Korean leader Kim Jong-un kicked off what is being called the summit of the century at 9:00 a.m. on Tuesday at Capella Hotel in Singapore’s southern resort island of Sentosa.

The two leaders greeted each other with a long handshake to begin the first talks between a sitting U.S. president and North Korean leader. The meeting venue was lined with U.S. and North Korean flags, seen as a powerful positive message about the future of the two countries’ relations.

Kim wore his trademark Mao suit, while Trump wore a suit paired with a red tie.

In their opening remarks, Trumps said in front of reporters, “We're going to have a great discussion and a terrific relationship.”

Trump said he expected “tremendous success” from the summit.

“It wasn't easy to get here,” Kim told Trump. “At times out past grabbed at our ankles and blocked our path but...we overcame all these obstacles to be here.”

Less than an hour before the meeting, Trump's motorcade departed from the Shangri-La Hotel, where the U.S. delegation is residing, while Kim’s convoy left from the St. Regis Hotel. The two hotels, minutes away from each other, both fall under a special event area designated by Singaporean authorities.

Similarly, Sentosa Island, known for its man-made beaches, golf courses, a casino and Universal Studios theme park, is designated as a special event area. Linked to the mainland by causeway, cable car and monorail, it is ideal for security.

The two leaders were scheduled hold a 45-minute one-on-one meeting, accompanied only by interpreters, before heading into a larger meeting where aides will join them. Then, they will have a working lunch.

The 112-room Singaporean-owned Capella Hotel opened in 2009 and was designed by the British architect Norman Foster, boasting colonial and modern buildings surrounded by a rainforest. It has two presidential suites, meeting rooms with full-length windows that overlook the South China Sea, and is walking distance from a major golf course.

The two sides engaged in last-minute, working-level negotiations through Monday as the United States called for North Korea’s complete denuclearization, while Kim Jong-un is expected to request some kind of security assurances for his regime.

Their historic meeting may possibly pave the way to a formal end to the 1950-53 Korean War, which ended in an armistice agreement.

Earlier Tuesday morning, Trump tweeted: “Meetings between staffs and representatives are going well and quickly....but in the end, that doesn’t matter. We will all know soon whether or not a real deal, unlike those of the past, can happen!”

He continued in another tweet: “The fact that I am having a meeting is a major loss for the U.S., say the haters & losers.” He then referred to North Korea’s release of U.S. hostages and its halting of missile tests, research and launches, and added, “these pundits, who have called me wrong from the beginning, have nothing else they can say! We will be fine!”

Leader Kim, after staying low-key and out of sight during the day on Monday, emerged from his hotel in the evening and took a tour of Singapore’s key sites, including the iconic Marina Bay Sands Hotel, accompanied by Singapore’s Foreign Minister Vivian Balakrishnan and Education Minister Ong Ye Kung. He was spotted smiling and looking relaxed as he toured the city, and even was spotted in a selfie with the two Singaporean ministers.

Both leaders arrived in Singapore Sunday, Kim on an Air China jet usually reserved for top Chinese officials, and Trump on Air Force One, straight from a G7 summit in Quebec, Canada.

Trump was scheduled to depart from Paya Lebar Airbase in the evening, and expected to address press before he left.