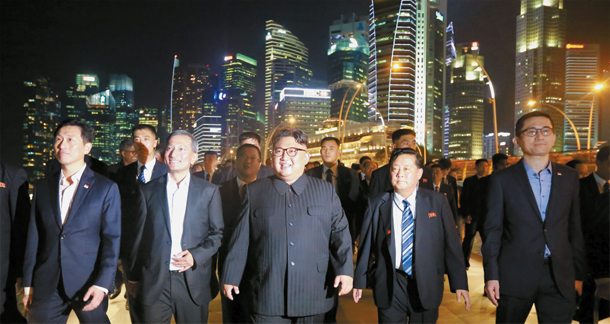 North Korean leader Kim Jong-un went on a surprise tour of Singapore on Monday night with his top aides and Singaporean officials. The following day, North Korea’s state media described it as an opportunity for the leader to learn about the Southeast Asian city-state’s social and economic development.

The two-hour jaunt included visits to Singapore’s best-known tourist attractions, including Gardens by the Bay, a waterfront garden, and Marina Bay Sands, the island’s iconic hotel.

It was the second time that the 34-year-old leader left the St. Regis Hotel, where he was staying for his summit with U.S. President Donald Trump. The first venture was a meeting with Singapore’s prime minister, Lee Hsien Loong, at the Istana, the presidential palace, on Sunday evening.

According to The Straits Times, Kim and his motorcade left the St. Regis Hotel at 9:10 p.m. on Monday and first stopped at Gardens by the Bay, a nature park with futuristic tree-like structures, and the world’s largest glass greenhouse.

During the tour, Balakrishnan took a selfie with Kim and Ong and posted it on his Facebook and Twitter accounts. The caption: “#jalanjalan #guesswhere?” “Jalan” is the Malay word for walking, and “jalan-jalan” means strolling or walking about.

After spending about 20 minutes at the park, the group then went to the Marina Bay Sands, the iconic hotel with a deck perched above three tall towers. Kim looked around the observation deck, which offers panoramic views of Singapore’s marina and central business district.

Kim’s last stop was the Jubilee Bridge, a newly built footbridge that spans across the Singapore River. He strolled for about five minutes before leaving for the St. Regis Hotel at 10:25 and returning to his quarters at about 11:20 p.m.

North Korea’s state newspaper, the Rodong Sinmun, covered Kim’s tour on the first page of its Tuesday edition with 14 photos, while the Korean Central News Agency (KCNA) said the leader learned about the “social and economic development” of Singapore.

“He said that he could get to know well about the potentials and development of Singapore’s economy through that day’s tour,” the KCNA reported in its English edition, “adding he came to have a good impression about the country.”

While on the observation deck at the Marina Bay Sands, Kim praised Singapore for being “clean and beautiful” and that he was “going to learn a lot from the good knowledge and experience of Singapore in various fields in the future.”

Kim has placed fresh focus on improving North Korea’s economy, saying during a meeting with top aides in April that the country no longer needed to further develop nuclear weapons because it had already mastered the program and instead should place priority on developing its economy.

The announcement was a shift from the Byungjin Nosun policy relayed in the same meeting just six months earlier, which refers to the simultaneous pursuit of economic growth and nuclear weapons development.

Kim has since dispatched officials to China to study its development model and economic reforms, and has shown keen interest in wiggling out of international sanctions during talks with Seoul and Washington.