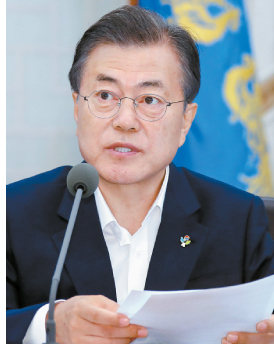 Moon had placed concerted efforts into mediating between the two leaders and making the summit happen. In a statement on Tuesday, he did not hold back his elation and sense of relief that the meeting, which at times seemed like it wouldn’t happen, concluded amicably with an agreement between both sides.

“The June 12 Sentosa Agreement will be recorded as a historic event that has helped break down the last remaining Cold War legacy on earth,” Moon said, referring to the resort island where the agreement was signed. “It is a great victory achieved by both the United States and the two Koreas, and a huge step forward for people across the world who long for peace.”

Moon characterized the summit as a turning point. The meeting between the two mercurial and headstrong leaders was almost unimaginable just a year earlier, when they were trading taunts and threats that many thought would erupt into a full-fledged war on the Korean Peninsula.

As he has done many times before, Moon thanked Trump for making the summit happen. “Once again, I would like to pay my respect to President Trump who achieved a feat that no one else has ever delivered,” he said.

Moon also complimented Kim, with whom he has met twice in the past two months, saying he would be remembered “as a leader who made a historic moment by taking the first bold step toward the world.”

“This is just a beginning and there may be many difficulties ahead, but we will never go back to the past again,” Moon said. “History is a record of people who take action and rise to a challenge. I, as president of the Republic of Korea, promise to make all-out efforts to help establish permanent peace on the Korean Peninsula and usher in a new era of coexistence and prosperity.”

On Tuesday night, Moon and Trump spoke over the phone about the summit. Attention now turns to whether any promises will actually be kept. One point of contention is a formal end to the Korean War, which concluded with an armistice rather than a peace treaty.

There was speculation that Moon might join Kim and Trump after their summit on Tuesday. That didn’t happen, but Moon is expected to keep pushing for a trilateral meeting with Kim and Trump to declare an end to the Korean War, possibly on the 65th anniversary of the armistice’s signing next month.

However, it would be a symbolic act with no legal force. Any formal peace treaty would require China’s participation, since the armistice was signed on July 27, 1953, by the United Nations Command on behalf of South Korea and the Chinese and North Korean militaries. Beijing has made clear that it will not be excluded from any transition to a peace treaty.

China sent hundreds of thousands of soldiers across the border at the height of the Korean War to save its communist ally from being taken over by U.S.-led multinational forces in November 1950, resulting in the deaths of more than 100,000 Chinese soldiers, including a son of Chinese leader Mao Zedong.

Moon and Russian President Vladimir Putin plan to discuss the economic potential of North Korea amid growing expectations that sanctions barring foreign investment in the country could be withdrawn if the North follows through on denuclearization promises. One of Moon’s priorities is to reconnect railroads and highways between the two Koreas.

Anticipation is high for additional meetings between Kim and Trump. The North Korean leader reportedly asked Trump to come to Pyongyang next month in a letter delivered by his right-hand man, Kim Yong-chol, at the White House last month. Or the meeting could take place in the White House since Trump said he would “absolutely” invite the North Korean leader to Washington. On Tuesday, he said future summits would come at “appropriate” times.

Moon is likely to have his third meeting with Kim in September or October. During their first encounter on April 27, the two Korean leaders agreed to meet in Pyongyang this fall.