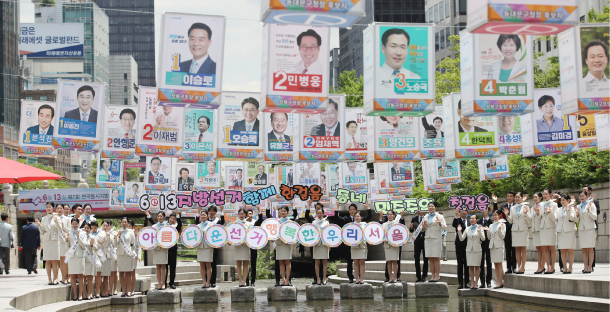 Voters nationwide head to the polls today to cast ballots in elections to fill more than 4,000 local government positions and 12 seats in the National Assembly.

Up for grabs in the local elections, the seventh of their kind since provincial offices were opened up to direct votes in 1995, are 4,016 gubernatorial, mayoral, local council and superintendent seats in all 17 provinces. The by-elections will fill 12 seats in the National Assembly that became vacant since the 2016 general election.

Voting proceeds at 14,134 polling centers around the nation on Wednesday from 6 a.m. to 6 p.m., according to the National Election Commission. In two days of early voting last Friday and Saturday, 8.64 million votes were cast, 20.14 percent of 42.9 million eligible voters. It was the second largest early voting turnout in history after the presidential election in May 2017.

The early voting turnout has raised expectations that total turnout may exceed 60 percent, higher than the previous local elections in 2014, when 56.8 percent of eligible voters voted.

Exit polls commissioned by three TV networks are set to be released at 6 p.m. Wednesday. Though pollsters say that high early voting turnout raises the uncertainty of the exit polls, in the previous local elections in 2014, exit polls correctly predicted the winners of every gubernatorial race across the country except for Gyeonggi.

Based on final polling data released before the opinion poll blackout period began last Thursday, the ruling Democratic Party (DP) appeared poised to win landslides in 14 out of 17 gubernatorial races, riding on high public support for the Moon Jae-in administration’s policy of rapprochement with North Korea.

Still reeling from last year’s impeachment and removal of President Park Geun-hye due to a corruption and abuse of power scandal, the Liberty Korea Party (LKP), the largest opposition party, is hoping for a high turnout by “shy conservatives,” conservative voters who don’t express their views openly but do so through votes. They are akin to Richard Nixon’s “silent majority” of the 1960s and ’70s.

While most regions appear unlikely to flip, uncertainty has been cast in the race for Gyeonggi governor after an actress confirmed rumors of an affair with DP candidate and former Seongnam Mayor Lee Jae-myung. On the Korean Broadcasting System’s evening news on Sunday, actress Kim Boo-sun claimed she shared an intimate relationship with Lee, who has been married since 1991, for about 15 months starting in December 2007.

Though Lee has vehemently denied the allegations, the opposition jumped on them with incumbent governor and LKP candidate Nam Kyung-pil accusing Lee of ethical laxity.

Nam, however, possesses his own share of liabilities: his son was detained on drug charges in September and was convicted of physical and sexual harassment of a lower-ranking soldier during his military service in 2014.

Due to the poll blackout, it is not known what effect the scandal has had on voters, though it is expected to sway some who remain undecided.

In South Gyeongsang, DP candidate Kim Kyoung-soo increased his support margin over his LKP rival to around 15 percent according to the latest polls by the JoongAng Ilbo, despite being mired in a scandal involving a blogger who manipulated online comments to generate public opinion favorable to the current president.

Kim has admitted to having met the blogger on several occasions, but has denied any prior knowledge of opinion rigging attempts. There is now a special counsel who was appointed by President Moon last Thursday investigating the opinion manipulation.

Tight races are also forecast for Jeju Island, an autonomously governed province in which the unaligned incumbent holds the lead, and Daegu, a traditional LKP stronghold threatened by a mounting challenge by the DP.