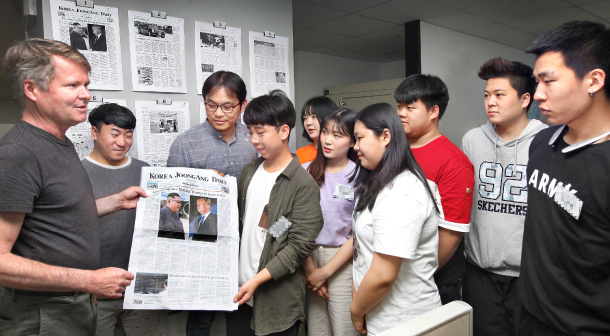 Students from the Yeomyung School, which educates young defectors and children of defectors in Seoul, meet the Korea JoongAng Daily’s chief editor, Anthony Spaeth, during the paper’s one-day journalism program at its newsroom in central Seoul on Tuesday. [PARK SANG-MOON]

The historic summit between U.S. President Donald Trump and North Korean leader Kim Jong-un was the talk of the town in many circles on Tuesday - including among a group of North Korean defector students participating in a one-day journalism program at the Korea JoongAng Daily office in central Seoul.

“On a day like today, does it get very busy in the newsroom?” asked one student, who defected from the North years ago, during a meeting with editors of the paper. The defectors’ names have been withheld for their protection.

“What are your thoughts on North Korea?” another student asked. “What do you think about Kim Jong-un?”

Sixteen seniors at the Yeomyung School, established in 2004 to educate young defectors and children of defectors, took part in a one-day journalism program sponsored by the Korea Press Foundation and hosted by the Korea JoongAng Daily. From May to November, the paper is running 16 such one-day programs for middle and high school students.

The North Korean defectors met with reporters, editors and page designers to understand the entire process - from finding sources and angles to designing the paper’s layout.

“English newspapers in Korea have a slightly different target audience compared to local papers,” Yim Seung-hye, a reporter at the Korea JoongAng Daily, said as she showed students images of the front pages of papers reporting on the summit. “For example, when U.S. President Donald Trump and South Korean President Moon Jae-in met for the first time in Washington last year, different papers churned out different headlines. Can you tell that English papers have a different target audience by comparing the headlines?”

“There is a focus on North Korea in the headlines of foreign media,” one student noted, while local papers are more focused on Trump’s intention to renegotiate a free trade agreement with South Korea, the student said.

The all-day program also included a visit to the paper’s printing facility.

“I didn’t realize before that publishing the paper daily would require this much work,” said a 23-year-old student surnamed Kim. “I’m not sure yet if I want to be a journalist, but I wanted to experience the newsroom because I like to read books a lot.”

The Korea JoongAng Daily has been running one-day journalism programs since 2009, but Tuesday was the first time that North Korean defector students joined.

“I think the day means a lot to us,” one student said, “since the summit is happening today. But we can’t say if the summit happening today is a good thing or bad thing before we see how any agreement between the two countries is carried out.”

In addition to the one-day program, the Korea JoongAng Daily also runs summer programs for middle and high school students where they can gain hands-on experience with reporting over a couple of days at the newsroom. For more information about the paper’s programs, call 02-2031-1295 or email park.sooyoung@joongang.co.kr.