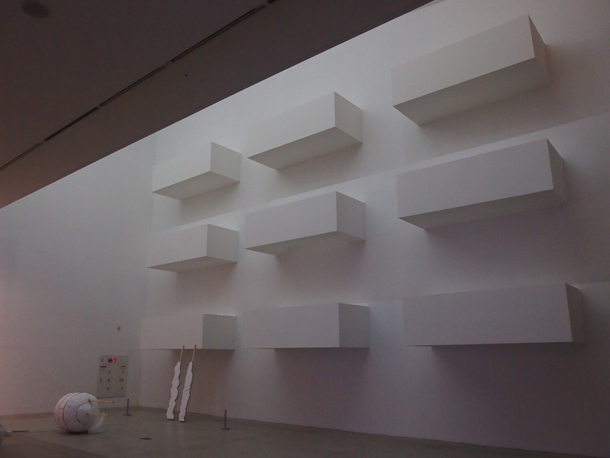 The “Phantom Arm” exhibit features works that explore the meaning of virtual space, such as Kim Dong-hee’s “Orbit, Move/Copy,” an installation that takes up a whole wall of the museum’s first and second floors. [YOON SO-YEON]

Thanks to the clear skies and warmer winds of early summer, being stuck inside may start to feel like a waste of a day. For art enthusiasts who would enjoy seeing art both in and outside of a museum, Buk Seoul Museum of Art (Buk SeMA) in Nowon, northern Seoul, offers a variety of exhibits on its grounds, four of which should not be missed.

The museum’s “2018 Seoul Focus - Design for Action,” looks at the idea of urban design not only from an economic or efficiency perspective, but also its relationship with the people it interacts with. For those looking for modern art, the museum offers “Phantom Arm,” an exhibit created by tech-savvy artists who were born into the digital era. Also available is “The Lost World,” an exhibit showcasing nature depicted through art and “Drawing and Playing with Jackson Hong,” which is perfect for those visiting with young art lovers. 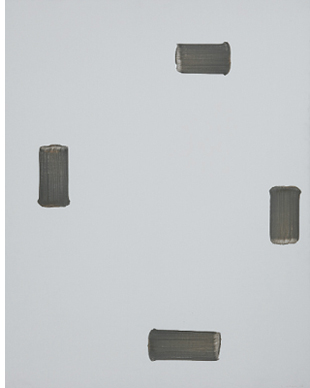 Lee Ufan’s “Correspondence” (1993) is on display in the first section of “The Lost World” exhibit. [BUK SEOUL MUSEUM OF ART]

Public design is a broad field of design that covers everything that has been designed for public spaces. Buk SeMA takes the chance to look at some public design projects in Nowon, and ways in which artists can better those designs to meet the needs of the neighborhood with the “2018 Seoul Focus - Design for Action” exhibition held through Sept. 30.

A total of 10 teams have chosen an example of public design work that they think could and should be improved upon, and presented ways in which it could change. Five of them - Post Standards, O Hezin+IWMW, Lee Eun-sun, Lee Sang-won and Sahmyook University Astri - have installed their ideas in the outdoor plaza of the museum.

The projects include low fences that can also function as benches by Post Standards and colorful shades that are also art installations by O Hezin+IWMW. Works from the other teams are displayed indoors.

Contemporary art has inevitably met the digital realm, a space in which everything is real and unreal at the same time. Although the internet provides us with all the convenience we need in our daily lives, the virtual world and its endless possibilities is a subject that nearly every modern thinker dwells upon.

At the “Phantom Arm” exhibition which runs through July 8, six artists - Kang Jung-suck, Kim Dong-hee, Gim Jeong-tae, Ram Han, Rahm Parc and the duo CO/EX, consisting of Kim Ju-won and An Cho-rong - present their interpretations of the virtual reality world, and “the rapidly changing creative environment through the spread of the internet and other technologies,” according to the museum.

The exhibit features installations and digital prints that visualize each artist’s image of what they believe to be the face of the virtual world, including Kim’s “Orbit, Move/Copy,” which takes up the whole wall of both the first and the second floor of the museum.

“With this exhibition, the Buk Seoul Museum of Art will function as a testing ground where the virtual world can encounter the real world,” explains the museum. 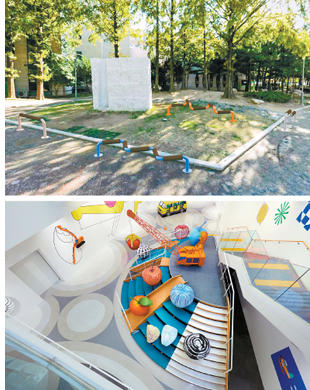 Artists have taken examples of public design gone awry in the areas around the Buk SeMA and recreated them, such as the work by Post Standars, top, for the “2018 Seoul Focus - Design for Action” exhibition. Above is “Drawing and Playing with Jackson Hong,” something for children to enjoy. [BUK SEOUL MUSEUM OF ART]

Works from the SeMA collection that look at nature and human’s relationship with nature have been gathered in an exhibit titled “The Lost World,” which runs until July 1.

The first section of the exhibit, “Self-effacing Correspondence with Nature,” features works by well-known names from the dansaekhwa [Korean monochrome painting] wave in the late 20th century, such as Lee Ufan, Ha Chong-hyun, Yun Hyong-keun, Chung Chang-sup and Quac In-sik. The second section, “Feminine Vitality and Memory” offers works from artists such as Yun Suk-nam, Park So-young and Sunny Kim who shed light on how women have been marginalized in society.

“Challenging the Mechanistic Worldview” is the final section and it features recent works of diverse styles and mediums that endeavor to deconstruct conventional frames of thought that derive from being overly trusting of science. Lee So-yo’s animal and fish anatomy collection sits next to Na Hyun’s “Nanjido” print series, both of which should not be missed.

While many parents bring their children to museums from an early age, many find that some exhibits are too difficult for kids to grasp.

Artist Jackson Hong comes to the rescue for younger visitors, who will get to have fun playing around the exhibit, which looks more like a well-designed playground than a stuffy art gallery. At the “Drawing and Playing with Jackson Hong” exhibit, just one installation work takes up the whole space.

Hong has recreated everyday objects like apples, pens, rulers and erasers with bright colors and bold lines so children can experience something new while they play in the installation.