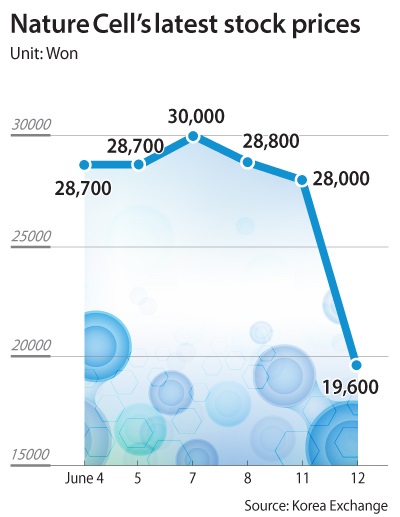 A Kosdaq-listed biotech firm came under scrutiny for allegedly manipulating its share price, the latest setback for bio shares that recently suffered losses after an accounting scandal at Samsung BioLogics.

Nature Cell, a stem cell therapy company, saw its stocks plummet 30 percent on Tuesday after reports that the prosecution raided its office earlier this month for allegedly manipulating stock prices for the company’s benefit. Nature Cell denied the allegation.

The Seoul Southern District Prosecutors’ Office suspects that the company attempted to push up stock prices by overstating the possibility of gaining approval from the country’s financial regulator in March.

Nature Cell’s shares surged between late last year and early March as the price jumped more than tenfold. The Ministry of Food and Drug Safety, however, withdrew its conditional approval in March for the sale of Nature Cell’s stem cell-based osteoarthritis treatment, Jointstem.

Ra Jeong-chan, CEO of Nature Cell, denied the allegations in an interview with the JoongAng Ilbo.

“Nature Cell isn’t involved in any stock manipulation, neither did the company benefit from such an attempt,” the chief executive said at the company’s headquarters in Yeongdeungpo District, western Seoul.

He said that the ministry’s withdrawal was a procedural problem, adding that the company filed an administrative suit against the agency.

But some investors are still doubtful because the chief executive has a history of stock manipulation.

When he headed a company called RNLBio in 2013, Ra was sentenced to three months in prison with four years of probation for stock manipulation and embezzlement. He appealed to the Supreme Court, where the case is still pending, but the company was delisted.

The company posted a loss until the second quarter of last year, but turned a profit in the third quarter with 7.5 billion won ($6.9 million) in sales and 459 million won in profit.

But the latest investigation will put pressure on the company and hurt investor sentiment toward bio stocks.

The segment has already experienced a capital flight after the controversy surrounding Samsung BioLogics’ accounting practices.

“Bio shares recorded low returns last month because of the BioLogics scandal and the perception that they are overvalued,” said Jin Hong-gook, a researcher at Korea Investment & Securities.

The Financial Services Commission will review whether the bio company violated accounting rules. Its securities and futures commission will open a session next Wednesday.