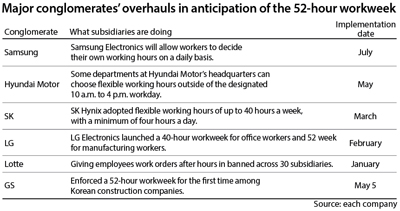 Boozy company dinners after long hours at the office are being replaced by take-home work and biometric scanners as Korea’s conglomerates prepare for the 52-hour workweek, which goes into effect next month.

Subsidiaries of major conglomerates, such as Hyundai Motor, SK and LG, in particular, have restricted employee workweeks to 52 hours in advance, and many are letting employees spend as little as 40 hours at work. The application of the new system varies by industry and position, but more workers have been given the right to choose their working hours.

Samsung Electronics is the most recent major company to come up with detailed guidelines.

It announced on May 29 that it would allow employees to choose their own daily working hours as long as they average 40 hours a week over the course of a month. The policy will go into effect on July 1.

Companies are scrambling to find ways to get their employees to leave the office on time. Some are simply switching off their office lights precisely at 6 p.m.

CJ Logistics is using software restrictions to stop workers from using their computers for more than 52 hours a week.

Some others have installed machines that recognize workers’ biometric information, such as their irises, fingerprints and veins, to strictly manage their working hours.

Samsung, Hyundai Motor and SK have developed a computer program that automatically calculates how many hours employees work each week.

Workers have to enter the minutes they spend taking breaks, such as drinking coffee and smoking cigarettes, during the workday.

But some fear that management might take advantage of loopholes in the system.

“We are still in the middle of a pilot period, but I am afraid my boss will tell me to enter hours that I spent working as non-working hours so that I can work more,” said an employee at one company on the condition of anonymity.

Employees at companies that shut down their computers or offices will likely have to work outside of the office to complete their workload.

Many employees and employers are also confused over what to do about company-related events that take place outside work hours.

The government has not yet imposed guidelines on whether meals or golf with bosses or business partners, weekend seminars and travel time for business trips should be classified as working hours or not.

“Given there is room for conflict in the imminent future, the government should come up with guidelines,” said Kim Young-wan, the head of the labor policy bureau at the Korea Employers Federation, a business lobbying group.

Samsung’s key affiliates have already tentatively agreed to ban their teamwork-building dinners, which used to involve drinking and karaoke, to avoid liability for accidents.

“We have been ordered by management not to have hoesik [company dinners],” said a spokesman for one of Samsung’s subsidiaries.

Courts have ruled in previous cases that any accidents that occur during company dinners can be considered industrial accidents. But whether after-work entertainment can be counted as working hours has still not been decided.