The 36-year-old has worked at the same watch factory in Seongnam, Gyeonggi, for the past eight years. He makes 9,500 won ($8.83) an hour, and as he averaged 60 hours of work a week in May, he earned 3.773 million won for the month. But his monthly salary is set to shrink to 3.317 million won a month starting in July, as he will be working eight fewer hours a week due to the new 52-hour workweek.

“I used to volunteer to work extra hours at least one day over the weekend to earn tuition fees for my children’s private institutes,” said Kang. “But now that I won’t be able to do so, I might have to choose between having my children quit their institutes and getting myself a new part-time job.”

Starting in July, his company will have to restrict the hours its employees can work, and Kang is one of many workers disgruntled about having his monthly income slashed.

Due to a revision to Korea’s Labor Standards Act, businesses with 300 or more employees will have to cut their maximum weekly working hours from 68 hours to 52 hours by July 1.

Currently, 40 hours are considered a regular workweek, an additional 12 hours are overtime, and 16 hours can be worked during weekends or holidays. After revision, weekend and holiday working hours will be considered part of overtime, which will still be capped at 12 hours.

The new regulations, however, won’t apply to businesses with fewer than five employees, as well as those in industries including transportation and communications.

If any worker is found to have worked more than 52 hours a week, the CEO of the company can be punished by a prison term of up to two years or a fine of up to 20 million won.

The government says the shortened working hours will improve the quality of life and productivity of workers and will eventually improve the country’s national competitiveness.

However, the side effects are hard to ignore. The National Assembly Budget Office predicts that after the new working hour system takes effect, some 955,000 employees, or 11.8 percent of all workers, will see their income fall. Each worker will receive an average cut of 377,000 won, or 11.5 percent, in their monthly salary. Ironically, low-income workers will face the steepest reductions.

Employees of service contract companies, such as cleaners and security guards, will see their income go down by 22.1 percent, or 401,000 won.

“The more insecure the type of employment is and the lower the salary is, the more employees rely on extra allowances,” said Kang Sun-il of labor consultant Hyean.

Workers have raised concerns over the labor conditions that the new workweek will encourage, as employers are more likely to push their existing employees to improve their productivity than hire more workers.

Only 26.3 percent of 595 companies surveyed by Saramin, a job information website, said that they would recruit more workers.

For the new system to have an effect, Korea will have to increase its notoriously low labor productivity. As of 2015, gross domestic product per hour worked, a gauge of labor productivity, averaged $31.80 in Korea - just 68 percent of the OECD’s average of $46.80.

“Companies will have to do away with inefficient work systems, such as frequent meetings and complicated reporting hierarchies,” said Lee Jung-hee, a professor of economics at Chung-Ang University. “Laborers will also have to concentrate as much as possible during their designated working hours.”

Experts point out that the revised Labor Standards Act, which classifies companies by industry, doesn’t reflect the reality of today’s business landscape. Companies these days are not confined to a single industry, as professionals from various industries work on individual projects for the same company. 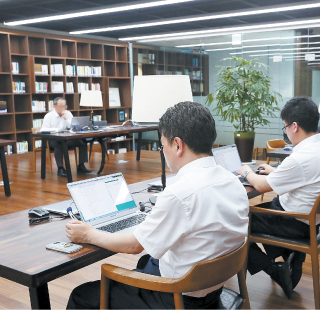 KEB Hana Bank employees work late on a special “concentrated work floor.” The bank’s headquarters in central Seoul now shuts down its computer system at 7 p.m. in preparation for the new 52-hour workweek, which will go into effect on July 1. [JANG JI-YOUNG]

Companies are facing a tough transition to the new workweek. They’ve been hit with a double whammy - labor shortages and growing expenses.

A mid-sized machine manufacturer in Guro District, western Seoul, has managed to meet its supply volume by having two teams of employees work 68 hours a week in two shifts. But the company will have to reduce its manufacturing volume starting on July 1.

“We have decided to hire more, even if it costs more,” said a human resources manager at the company. “But we have barely filled half of the new job posts, as only a few workers have applied.”

He added the company has no choice but to automate further and to increase the production volume at its factories in China and India.

The institute projects that a 52-hour workweek will result in a labor shortage of 266,000 workers. To maintain their current production volume, businesses will have to hire more to make up for their labor shortage, and additional expenses, including salaries, training and welfare costs will add up to as much as 12.3 trillion won a year.

Businesses with fewer than 300 employees will be hit the hardest, as they will have to cover 70 percent, or 8.6 trillion won, of the additional spending.

“Smaller companies can’t help but choose to reduce their local production volume if they can’t manage to hire additional workers that could make up for slashed working hours,” said Noh Min-sun, a researcher at the Korea Small Business Institute. 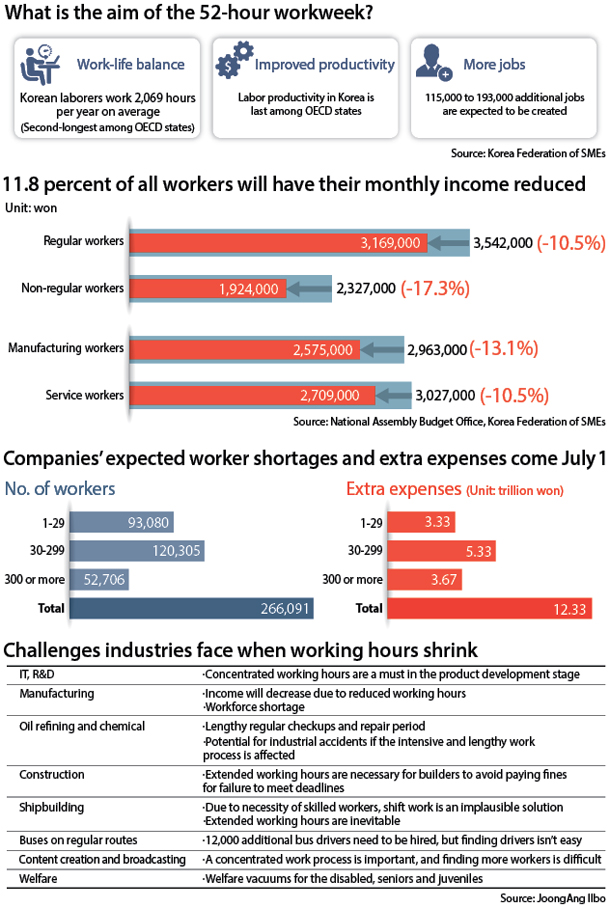 The think tank dedicated to small- and medium-sized businesses conducted a survey of 500 SMEs last month and projected that they would suffer an average shortage of 6.1 workers.

Manufacturers that face seasonal fluctuations in demand are still agonizing over countermeasures. Some of their products can’t be stored as inventory for a long period of time. Their employees have to work extra hours when demand peaks - but they won’t be allowed to come July 1.

“We have to hire more when we think about the six months during which we see a large order volume, but we have no solution for what to do with the extra work force during the other six months,” said a spokesman for a mid-sized pharmaceutical company.

Ice cream producers, which post about half of their annual revenue from May to September, already find it difficult to manage their work forces in a flexible manner.

Start-ups will also be subject to the new working hour rules. But there is often no distinction between working and non-working hours for start-ups that are in their early stages.

“We have to work around the clock until we meet the deadline to complete and supply the software that large companies order,” said a developer surnamed Cho at a software start-up at the Guro Digital Complex in western Seoul. “Deadlines are the key to software development.”

Social welfare service providers are not included in the “exceptional industry” category that grants exceptions from the new working hour system, so concerns of a “welfare vacuum” that will affect the disabled and elderly are growing.

“It’s hard to find those who are willing to sacrifice themselves and tolerate lengthy working hours and low pay,” said Choi Seon-suk, secretary general of the Korea Council of Group Homes for Children and Youth. “The government needs to come up with complementary measures, such as improving compensation for welfare workers and adding more workers.”

Construction companies are trying to figure out what to do with the workers they have dispatched to overseas construction scenes.

One construction company is building a factory in the Middle East, and the 400 Korean workers it has dispatched there work more than 60 hours a week.

The company will also have to trim their working hours to 52, given that Korean law will apply to them.

“Middle Eastern and Southeast Asian countries limit the number of foreign workers, which makes it impossible for Korean companies to send more of their own employees,” said Choi Eun-jung, a researcher at the Construction Economy Research Institute of Korea. “Korean builders might have to pay penalties for failing to meet the deadline due to their labor shortage.”

Experts say the situation will worsen beginning in 2020, when companies with 50 to 300 employees will also have to abide by the 52-hour workweek. The number of companies that will face sluggish growth due to increased labor costs and reduced productivity will likely increase.

“The government’s expectation of job creation as a positive outcome of the work system revision may turn out to be the opposite, should companies stop growing,” said Chun Sam-hyun, a law professor at Soongsil University.