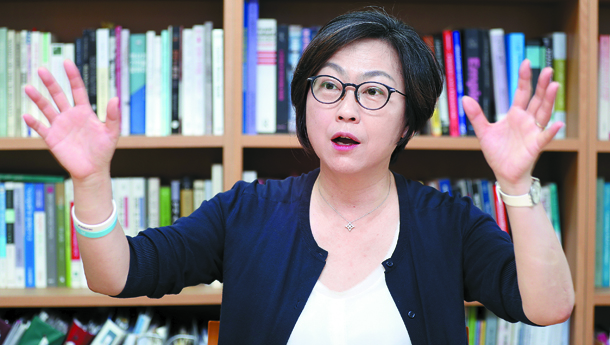 Korean feminism is at a crossroad. What started as the country’s own Me Too reckoning over sexual harassment and abuse in the workplace has spawned protests in other realms — rallies decrying sexism in police investigations of Peeping Tom crimes, petitions calling for the legalization of abortion and a cultural movement to ditch the bra. Feminism has become the buzzword of 2018 in Korea.

Carrying the flag are women in their 20s. They are digital natives, masters of social media and the smartphone. The latest rally against sexism on the force last Saturday was the largest women-only rally in Korea, drawing over 15,000 people, and it was all organized online. The event was controversial because it only allowed the participation of cisgender women, drawing backlash from young men who accused the women of misandry. In turn, the women accused the men of misogyny.

To provide context for this watershed moment in Korean feminism, we spoke with Lee Na-young, a professor of sociology at Chung-Ang University in Seoul. She is a leading scholar of women’s studies with a B.A. in English literature from Yonsei University and a Ph.D. in women’s studies from the University of Maryland. Lee has actively spoken about issues such as the Japanese military’s use of sex slaves, euphemistically referred to as comfort women, during World War II. At Chung-Ang University, she established a gender equality counseling center in 2009 and Korea’s first human rights center on a college campus in 2012. Below are edited excerpts from our conversation with Lee.

Q. On June 2, we saw a group protest topless outside Facebook Korea’s headquarters over the removal of some images from a topless rally. That was quite radical and unlike anything we’ve seen in Korea. How did we get here?

A. The history of feminist movements has two streams: the women’s rights movement, which demanded equal legal rights for men and women, and the women’s liberation movement, which sought changes in everyday life and culture. In the United States, de jure inequality was largely abolished in the mid-1960s, but de facto inequality was still present. This gave rise to the concept of “everyday democracy,” which warns that women will forever be second-class citizens, even with equality in the law, unless patriarchal culture is torn down. Thus began the second wave of feminism that aimed to uproot the patriarchy, a structure older than even capitalism.

Do you mean to say it’s similar to what Korean women in their 20s are doing now?

Western feminism is already in its fourth wave. Fourth-wave feminism has a strong online base and is grassroots, unpredictable and heterogeneous. Korean feminism has the style of fourth-wave feminism — the online base and format — but its content is second-wave. Second-wave feminism saw gender itself as domination and subordination and moved the topic of sex from the private sphere to the public. It focused on issues including sexual self-determination, reproductive rights, prostitution, pornography, sexual assault and domestic violence. It had campaigns such as rallies against the Miss America pageant and the “freedom trash can” performance in which women threw away products perceived to be oppressive, such as makeup, high heels and underwear.

In the United States, women who were born during the postwar economic boom and did not face discrimination within their nuclear family were at the forefront of the second-wave movement. Their frustration came from the way social progress failed to catch up with educated and enlightened women. This is very similar to what young Korean women are experiencing now. They grew up pretty much equal to their brothers within the nuclear family and did as well as boys in their high school years.

Some people say the era of “gender politics,” where the political differences between genders come into focus, has begun.

They also believe that men in their 50s ruin their sons. For example, if their sons don’t do as well as girls in school, they might put their sons down by calling them “idiots who lose to girls.” Then their sons take out their frustration on their female peers. So women in their 20s clash a lot with even liberal men in their 50s, for example men who support President Moon Jae-in or who used to be activists in their college years. And as for conservative men, they don’t even bother talking to them — those people are just ridiculous.

Aren’t misandry and the exclusion of men real problems?

I think mirroring [the strategy taken up by many women’s groups] is an excellent strategy. Mirroring is basically, “You don’t understand when we explain what you did wrong, so just look at yourself in the mirror.” It criticizes misogyny by showing men a mirror image of it with the genders reversed. This will naturally disappear as misogyny fades. After all, a reflection disappears when the thing it’s reflecting goes away. Prejudice against women is exhibited by men every day and no one calls it misogyny, not even the police and press. Now that women are doing it, it’s getting a lot of media attention. Calling their actions misandry now would be nonsense. How can women exclude men when men are in control of politics and society?

But the rallies against sexist police investigations were limited to cisgender women.

That was to send a message that women in Korea can’t be safe in any space or relationship. To be clear, feminism does not demonize individual men. Men go ballistic on pedophilic criminals, but that’s just a way to distance themselves from the bad guys to make themselves seem like the good guys. Women know that this isn’t just a problem with certain individuals; it’s the result of a larger framework. Men can inadvertently become perpetrators if they live in a sexist and patriarchal society, and women who align themselves with sexist viewpoints can become perpetrators as well.

What do you think about the backlash?

What backlash? Nothing can really have backlash until it becomes dominant. Feminism is just starting to be criticized, and that’s only proof that its power is growing. The world looks like sunshine and rainbows when women are silent and obedient. It seems like there is a lot of conflict between male and female college students these days. That’s just because universities are open and democratic. Spaces that seem silent and peaceful are more oppressive.

Men largely have three responses to feminism: women should also serve in the military, men are victims of reverse discrimination and male libido is uncontrollable. How would you answer to those responses?

Women are against the oppressive nature of military culture itself. Women could serve in the military, but we need to fix military culture before that can happen. To tell women to serve while ignoring issues like human rights for soldiers and sexual assault in the military would mean subjecting more people to these horrors just because men are currently facing them. As for reverse discrimination, Korea always scores the worst in gender equality among countries in the Organization for Economic Cooperation and Development. Where is this reverse discrimination they speak of?

In the West, it has long been established since the 1970s that sexual desire is not natural but socially and culturally constructed. What’s more, people who argue that male desire is natural have never said female desire is also natural. Young people these days question the statement that the three primitive desires are for sex, food and sleep. Who first said that? Where’s the evidence? Nobody knows. It’s just a myth made to tolerate male sex culture.

Where is this movement going in the future?

Feminism has become an irreversible current. The conversation shouldn’t be about whether this is misandry or exclusion of men. We should focus on how the older generation will respond to the issues that the younger generation has brought up. The younger generation will shape the world in just a few decades. They envision a world that is much better than the world we live in right now. Their vision is simple: No one should be discriminated against because of their gender, race or socioeconomic class. We need to recognize that accepting their agenda will be much better for Korea’s future than suppressing them.