Meet the aides who spoke for Trump and Kim

Meet the aides who spoke for Trump and Kim 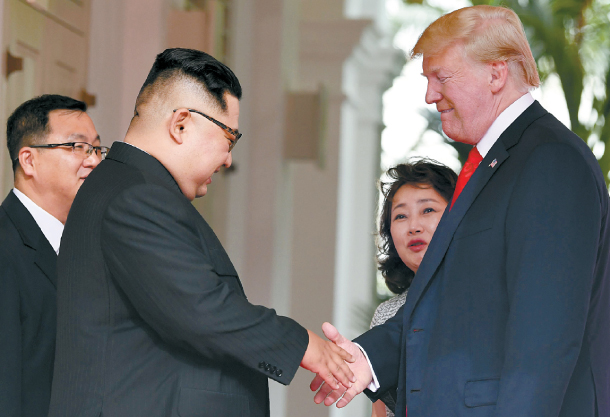 When U.S. President Donald Trump and North Korean leader Kim Jong-un held their historic one-on-one meeting in Singapore on Tuesday, there were only four people in the room: Trump, Kim and their interpreters. On Trump’s side was Lee Yun-hyang, chief of the interpreting services division at the U.S. State Department, and Kim had Kim Ju-song, the North Korean leader’s go-to man for English translations.

Lee, 61, began working full-time for the State Department in 2009 after several part-time stints. In 2010, she interpreted for the meeting between former Secretary of State Hillary Clinton and South Korean President Lee Myung-bak, and when President Barack Obama visited South Korea in 2014, she accompanied him as his official interpreter.

Lee majored in singing at Yonsei University in western Seoul and worked as a student reporter for the school’s English newspaper. After getting married, she followed her husband to the United States to study and stayed there for about two years. When she moved back to Seoul in 1989 at age 33, her friend convinced her to apply to the Graduate School of Interpretation and Translation at Hankuk University of Foreign Studies in Seoul, where she eventually graduated from.

During an interview with the JoongAng Ilbo in 2015, Lee said that confidentiality was the most important quality in interpreters at summits. She said she tries to forget what leaders have said once their meetings end.

Little is known about Kim Ju-song, the North Korean interpreter who shadowed Kim Jong-un during the summit. He accompanied Kim Yong-chol, the vice chairman of the Workers’ Party’s Central Committee, when he visited the White House earlier this month to meet Trump and convey a letter from Kim Jong-un. Kim Ju-song also accompanied Kim Yong-chol when he met with U.S. Secretary of State Mike Pompeo in New York before he met with Trump.

In Singapore, Kim Ju-song handled all of Kim Jong-un’s Korean-English translations, from his meeting with Singapore’s Prime Minister Lee Hsien Loong on Sunday evening to the summit with Trump on Sentosa Island on Tuesday.

Thae Yong-ho, North Korea’s former deputy ambassador to the United Kingdom who defected to the South in 2016, discussed Kim Ju-song in his recent memoir “The Secret Code of the Three-Story Secretariat Office: Thae Yong-ho’s Testimony.” He wrote that Kim Ju-song was affiliated with a team within the Workers’ Party International Department in charge of providing interpretation services for Kim Jong-un.