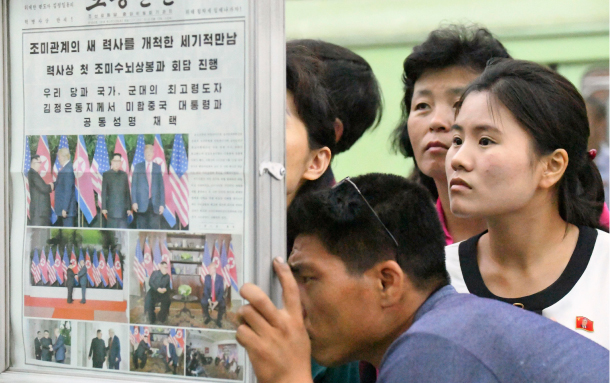 If Pyongyang destroys a “major missile engine testing site,” as U.S. President Donald Trump said it would on Tuesday after his summit with North Korean leader Kim Jong-un, the move could indicate the young leader’s willingness to denuclearize.

But as with the dismantlement of the Punggye-ri nuclear test site last month, just how far the regime will go in closing down the area - and whether it will have any effect on its nuclear capabilities - remains unknown.

Trump told international reporters in Singapore on Tuesday after signing a joint statement with Kim that the North Korean leader told him he was going to destroy a major missile engine testing site.

The location of the site was not given, and Trump did not go into the details of the test site’s destruction.

The agreement wasn’t included in their statement, said Trump, because he and Kim “agreed to that” after the document was signed.

“That’s a big thing, for the missiles that they were testing, the site is going to be destroyed very soon,” Trump said. “I said, ‘Do me a favor. You’ve got this missile engine testing site. We know where it is because of the heat.’” When Trump asked Kim whether he could close the site, the North Korean leader reportedly said he would.

“I think he’ll do it. I really believe that,” Trump said. “They have a very powerful engine testing site that, again, we’re able to see because of the heat that it emits.”

He added, “Honestly, I think he’s going to do these things. I may be wrong. I mean, I may stand before you in six months and say, ‘Hey, I was wrong.’ I don’t know that I’ll ever admit that but I’ll find some kind of an excuse.”

North Korean state-run Korean Central News Agency (KCNA) made no mention of the engine test site on Wednesday in its coverage of the summit, but said that Kim said his country would take “additional good-will measures” if Washington takes “genuine measures” to build trust in order to improve the North-U.S. relationship.

Both leaders shared thoughts on the process of denuclearizing the Korean Peninsula in a “step-by-step” manner, according to the KCNA.

South Korean analysts believe Trump was referring to the engine testing site in Cholsan County, North Pyongan Province, along the west coast of the country. In the past, North Korea test-fired several ballistic missiles into the East Sea from the site.

North Korean media reported last year that a successful engine test was carried out at the site on March 18. Kim was so pleased, he was pictured giving a piggyback ride to an engineer.

The Cholsan test site is believed to be where North Korea developed its engine for the Hwasong-15 intercontinental ballistic missile, which can target the U.S. mainland.

When the North test-launched the Hwasong-15 on Nov. 29 of last year, it flew 950 kilometers (590 miles) after peaking at an altitude of 4,475 kilometers. If the missile is positioned at a normal angle, South Korean experts believe it could fly farther than 10,000 kilometers, enough to hit the east coast of the United States.