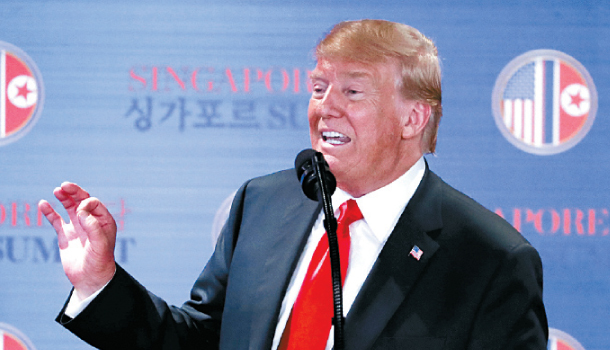 Among the few pledges that came out of the historic summit between U.S. President Donald Trump and North Korean leader Kim Jong-un on Tuesday was one made by Trump to stop his country’s “war games” with South Korea if the North follows through on steps to denuclearize.

But the scale of such a drawdown, and which exercises qualify as “war games,” remains in question.

During a post-summit news conference, Trump said the United States would be “stopping the war games.” In an interview with Fox News’ Sean Hannity afterward, Trump reiterated his stance. “We’re not going to be doing the war games as long as we’re negotiating in good faith” with North Korea, he said.

A whirlwind day of handshakes, meetings and one-on-one talks concluded with the two headstrong men signing a joint statement in which Trump committed to providing security guarantees for North Korea, while Kim “reaffirmed his firm and unwavering commitment to complete denuclearization of the Korean Peninsula.”

However, the four-part statement, which ran for about a page and a half, did not mention joint exercises or specific security guarantees that the United States will provide the North, though the latter issue will likely come up in future negotiations if North Korea follows through on steps toward denuclearization.

North Korea’s state media enthusiastically reported on the summit on Wednesday. The official newspaper, the Rodong Sinmun, dedicated the first four pages to the event and published multiple photographs of Kim and Trump. It also published the full text of the joint statement, just as it did when Kim first met South Korean President Moon Jae-in in April.

The North’s Korean Central News Agency (KCNA) reported that Kim told Trump it was urgent to make a “bold decision on halting irritating and hostile military actions against each other.” In turn, Trump reportedly said he understood this and “expressed his intention to halt the U.S.-South Korea joint military exercises, which the DPRK side regards as provocation, over a period of goodwill dialogue between the DPRK.”

The KCNA also reported that Kim invited Trump to visit Pyongyang at a convenient time and Trump likewise extended his own invitation for Kim to visit the United States. “The two top leaders gladly accepted each other’s invitation, convinced that it would serve as another important occasion for improved DPRK-U.S. relations,” the article read.

North Korea’s state media reports were consistent with statements that Trump made in his solo news conference and interviews after the summit.

“We will be stopping the war games,” Trump said during the news conference, “which will save us a tremendous amount of money - unless and until we see the future negotiation is not going along like it should.”

Trump called the exercises “tremendously expensive” and linked them to the issue of cost-sharing with the South Korean military.

“South Korea contributes, but not 100 percent,” he said, “which is certainly a subject that we have to talk to them about also. And that has to do with the military expense and also the trade.”

“It’s a very provocative situation when I see that,” he continued, “and you have a country right next door. So under the circumstances that we are negotiating a very comprehensive, complete deal, I think it’s inappropriate to be having war games.”

Trump has linked security issues with trade negotiations before. Seoul and Washington are in the middle of negotiating a deal to share the cost of stationing U.S. troops in South Korea. The current arrangement, the Special Measures Agreement, is set to expire at the end of the year.

During the news conference, Trump said he would eventually like to see the 28,500 U.S. troops on the peninsula withdraw, but he has no plans yet to reduce their military presence. A White House official clarified later on Tuesday that the U.S. military would continue to train with its South Korean counterparts and conduct military drills but refrain from large-scale, joint exercises, according to The Wall Street Journal.

The Wall Street Journal reported that a White House official later clarified that Pence had “asked about force readiness and said that while the semiannual war games would cease - assuming parameters of the deal are met - regular readiness training would continue.”

South Korea’s Blue House also left open the possibility of halting of such large-scale joint military exercises with the United States if it provides a way to further negotiations on the North’s denuclearization.

“At the current point, we need to figure out the exact meaning and intention of President Trump’s remarks” on war games, Kim Eui-kyeom, a spokesman for the Blue House, told reporters in Seoul on Wednesday. “However, we believe there is a need to consider various ways to further advance dialogue so long as serious discussions are being held between the United States and North Korea on the denuclearization of the Korean Peninsula and the building of relations.”

Last month, North Korea abruptly withdrew from scheduled ministerial-level talks with South Korea, blaming the Max Thunder drill with the U.S. Air Force. The North has traditionally responded sensitively to such large-scale military exercises. In February, it agreed to participate in the PyeongChang Winter Games only after Trump and Moon promised to delay their annual joint drills during the Olympic period. This in turn led to a period of detente on the Korean Peninsula, which helped paved the way for an inter-Korean summit and the first North-U.S. summit.

The next large-scale South-U.S. exercises, Ulchi Freedom Guardian, which involves computer-simulated war games, is typically scheduled around August. North Korea has heavily criticized the exercise in the past.

In another interview with ABC News on Tuesday, Trump said that halting joint South Korea-U.S. military drills is “something that I’ve wanted to do from the beginning.”

“We stopped playing those war games that cost us a fortune,” Trump said. “You know, we’re spending a fortune. Every couple of months we’re doing war games with South Korea.”

As he did earlier in his news conference, Trump referred specifically to the practice of flying bombers from an air base in Guam. “We’re bombing empty mountains for practice. I said, ‘I want to stop that and I will stop that, and I think it’s very provocative,’” especially, he added, since he is “getting along” with North Korea now.

On the withdrawal of U.S. troops from South Korea, Trump reaffirmed, “We didn’t discuss that, no.”

Trump further rejected the notion that the United States’ nuclear umbrella over South Korea is on the table for negotiations in the process of “complete denuclearization of the Korean Peninsula.”

“No,” he said. “That means that they’re going to get rid of their nuclear weapons. We never even discussed the other,” referring to the United States’ withdrawal of its nuclear protection of South Korea.

Trump also said he disagrees with critics who believe that Kim will never give up his nuclear weapons, adding that their joint statement calls for “complete total denuclearization.” He added, “Without that, I wouldn’t have been interested. I believe that he wants to get it done.”

The joint statement between the two leaders did not include the technical term “complete, verifiable, irreversible denuclearization,” or CVID, as Washington had been demanding.

However, Trump told ABC, “We’re going to be verifying, and we’re going to be working with them.” He said he believes Kim wants get rid of the nuclear weapons “relatively quickly.”

“They’re going to start working on it immediately,” he said, adding that the United States is working with South Korea, Japan and China in this process. “We have the framework of getting ready to denuclearize North Korea.”

Trump further acknowledged that North Korea has “really already started” the process by blowing up its Punggye-ri nuclear test site on May 24, a process witnessed by a small group of journalists from five countries.

On security guarantees for Kim’s regime, Trump was evasive. “He’s going to be happy,” he said. “His country does love him…and I think they’re going to end up with a very strong country.”

“I do trust him,” Trump said. Kim “wants to do the right thing.”

Trump emphasized that he wanted the process to begin. “I want to see some real work going on, which I believe I will,” he said, “and I would love to have him at the White House - whatever it takes.”

U.S. Secretary of State Mike Pompeo, who has been a key figure in organizing the summit, flew to Seoul on Wednesday evening to brief Moon and South Korean officials on results of the summit.

South Korea’s minister of foreign affairs, Kang Kyung-wha, is scheduled to have a one-on-one meeting with Pompeo on Thursday, followed by a meeting including their Japanese counterpart Taro Kono.