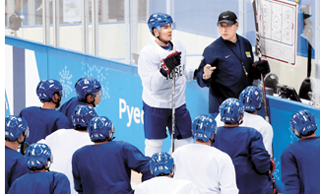 Paek, a former National Hockey League (NHL) defenseman for the Pittsburgh Penguins, was appointed head coach in July 2014. At that time, Korea’s ice hockey team was so bad that the president of the International Ice Hockey Federation said that Korea shouldn’t participate in the 2018 PyeongChang Winter Olympics, despite being the host country.

When Paek was appointed the team’s new head coach, he focused on improving the players’ physical strength. During the offseason, rather than just having the players run and lift weights to increase their muscle mass, Paek created a training program that would keep the players on the rink for all three periods at a constant pace. Paek also added six naturalized athletes from Canada and the United States to the team, which also allowed the Korean players to improve their skills.

When the naturalized athletes first joined the team, they had to play full games, as they were the team’s main scorers. Now, Kim Sang-wook and Kim Ki-sung are strong scorers for the team, as well.

During Paek’s four seasons as head coach, he has had a major impact on Korean ice hockey, and led the team to its peak in the 2016-17 season. Paek led the team to a second-place finish at the 2017 Sapporo Asian Winter Games, the country’s best-ever result.

After the Asian Games, Korea’s world ranking jumped to 21st, and the team was finally promoted to the International Ice Hockey Federation (IIHF) World Championship, the top international hockey division. In April 2017, Paek led the team to a runner-up finish at the IIHF World Championship Division I Group A. The team’s runner-up finish surprised the world, as they were the lowest-ranked team in the group heading into the tournament.

Korea was eventually given a spot at the 2018 PyeongChang Winter Olympics in February.

Though Korea lost all four of its group matches at the Olympics, the team put up a good fight, losing 1-2 to sixth-ranked Czech Republic and 2-5 to fifth-ranked Finland. After the Olympics, Korea competed at the IIHF World Championship but lost all six games to finish in last place in the top division in May. Due the team’s poor performance, Korea was relegated back to the IIHF World Championship Division I Group A, where the team will compete against Kazakhstan, Belarus, Slovenia, Hungary and Lithuania in 2019.