‘We should enjoy the tournament and get rid of pressure’

‘We should enjoy the tournament and get rid of pressure’ 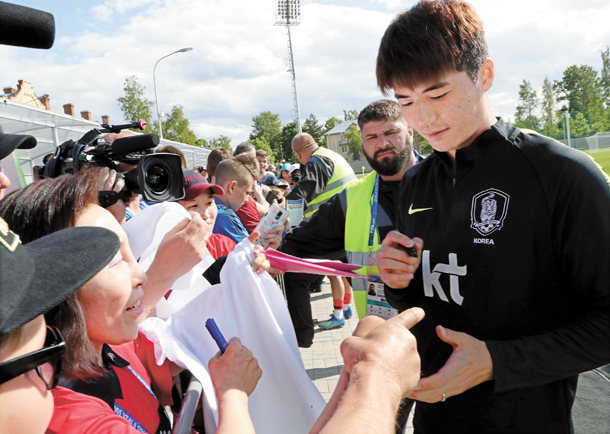 Korean captain Ki Sung-yueng is one of those players who isn’t afraid to express his thoughts and feelings.

In a recent friendly match against Bosnia and Herzegovina, Ki threw away his captain’s armband in the locker room during halftime after his side conceded two goals at home. After Korea was held to a scoreless draw against Bolivia in their World Cup tuneup match in Austria, the Swansea City midfielder told reporters that he felt like he was a “liar” since he couldn’t keep his word to fans with the poor results.

Ki knows that his words and actions can affect the team atmosphere, but the 29-year-old really doesn’t like pretending everything going is well.

“My past remarks were not intended to earn sympathy,” Ki told reporters Wednesday after Korea’s first training session at Spartak Stadium in Lomonosov, a suburb of Saint Petersburg, Russia. “As a national team player, I want to play a good game at the World Cup more than anyone else. I made those comments because I felt like we repeated the same mistakes over and over again.”

Korea had their first training session in Russia on Wednesday, five days ahead of their World Cup Group F opener against Sweden. Korea are scheduled to face Mexico on June 23 and Germany on June 27.

Ki said staying healthy is important for his team at this juncture.

“I think we’re about 90 percent ready,” he said. “Honestly at this point, there isn’t any more training left to do, and even if you do, it’s not going to make a big difference.”

Ki, who has 102 caps, said the players are all set and they are determined to show their talents on the pitch.

“I told the players that we should enjoy the tournament and get rid of pressure,” he said. “With this precious opportunity, I hope the players can display their character on the pitch.”

Ki will play in his third World Cup, and he knows how it feels to have success and failure at the World Cup. At the 2010 World Cup in South Africa, Korea reached the round of 16, the first time that the national team achieved such a feat on foreign soil. But at the 2014 World Cup in Brazil, Korea crashed out of the group stage with one draw and two losses.

“I’ve learned many things from the past,” he said. “But I’m not sure whether I can rely on those experiences 100 percent.”

Ki acknowledged that Korea is certainly an underdog in its group, but things can change depending on their training in St. Petersburg.

“Even if you are not fit at this moment, it can change over the next few days,” he said. “I think if our players are fully fit, we can take a shot at victory.”