Earned income tax credit helps the poor get by

Earned income tax credit helps the poor get by 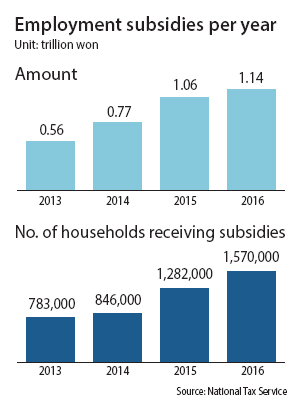 As an actor struggling to make ends meet, Mr. Kim often relied on manual labor jobs to get by.

In May 2016, the National Tax Service contacted Kim to tell him that he may qualify for an employment subsidy by the government. Though Kim was doubtful anything would come of it, he filled out the application. In September 2016, he received about 2 million won ($1,846) from the government, which he used to build his acting career.

Any Korean citizens with incomes below a certain level can qualify for the government support, which is also known as earned income tax credit (EITC). As concerns about the impact of the higher minimum wage mount, the government is likely to expand the EITC policy.

High-ranking government officials met recently to discuss how to remedy the country’s worsening income inequality. At the meeting, Kim Dong-yeon, Korea’s financial minister and deputy prime minister for the economy, said the government will consider necessary funding in next year’s budget and tax reform process, which would include tax breaks for those with low incomes.

Moon Sung-hyun, the chairman of the Economic and Social Development Commission, a presidential advisory body, said earlier this week that the government should strengthen Korea’s social safety net, including the EITC, in order to reduce income inequality.

Korea first launched the EITC in 2008 in order to give incentives for low-income individuals to work. Anyone who met the income standards by Dec. 31, 2017 and also met other minimum criteria may qualify for screening.

The most notable aspect of the EITC policy is that it requires recipients to work. It is meant to provide an incentive to work, as the government assistance grows alongside a recipients’ paycheck up until it reaches 13 million won.

“With businesses struggling, there is a high possibility that a drastic rise in the minimum wage will worsen employment in the country,” explained Ahn Chang-nam, a taxation and finance professor at Kangnam University. “The government poured in about 3 trillion won to stabilize employment, but it really should have extended the benefits of employment support [EITC].”

“It’s appropriate for Korea to expand the support, given that it lags far behind major economies such as the United States,” said Yoo Gyeong-joon, the former commissioner of Statistics Korea and a professor in the human resource development department of the Korea University of Technology and Education. “But the government should monitor the credit delivery mechanism to make sure it doesn’t waste the budget.”